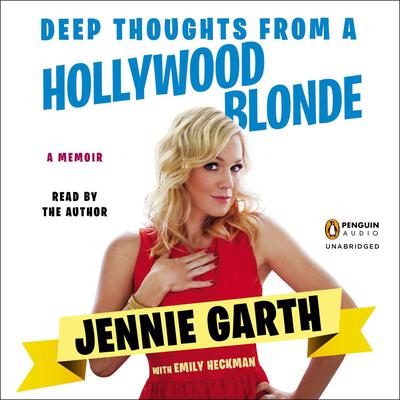 Deep Thoughts From a Hollywood Blonde

For the first time ever, Jennie Garth is putting it all out there, sharing her joys and her sorrows, her successes and her failures, with candor and a surprising, even bawdy, sense of humor.

From her sudden rise to fame as a golden-haired teen beauty, to recently redefining herself as a single working mother to three growing girls, Jennie Garth has defied the odds and thrived in a town that can be more than a little tough on its blondes.

Since Jennie landed in Hollywood at just sixteen, she has built an enduring career as a television and film actress, producer and director, beginning with her iconic turn as Kelly Taylor on Aaron Spelling’s smash hit Beverly Hills 90210, a show that ran for a decade and which cemented Jennie’s place in American pop culture.

Recently, Jennie found herself facing her forties from a place she never expected to be in: newly single, in demand again as an actress after years spent focusing on her family, and all over the tabloids. So she decided to do what surprised many—including herself: she decided to write about it, to tell her own story, in her own words.

And now, in this intimate memoir, she explores the highs and lows of her life, both in front of the camera and behind closed doors, revealing the real Jennie Garth—smart, funny, and stronger than she ever realized.

This is one unforgettable, utterly loveable Hollywood Blonde, and these are her deep thoughts.


"No one warned me that deciding to write a book about my life would unleash all of the insecurities, fears, and self-doubts I'd been trying to outwit and outrun my whole life, but that's exactly what happened. I wanted to tell my truth with as much courage as I could muster and to be as fearless as possible as I delved into the darker corners of my mind. The result surprised me: I got to know myself in new ways.

Revealing myself in these pages has been at times terrifying, but also one of the most liberating experiences of my life. That's because once you start writing, all of these embarrassing, wonderful, hilarious, painful, and surreal things that make you who you are get flushed up to the surface. And so word by word, I began to put the story of me together. Now all of these personal recollections, memories and anecdotes have been printed and bound into this book, which means that now you get to know me, too."
—Jennie Garth