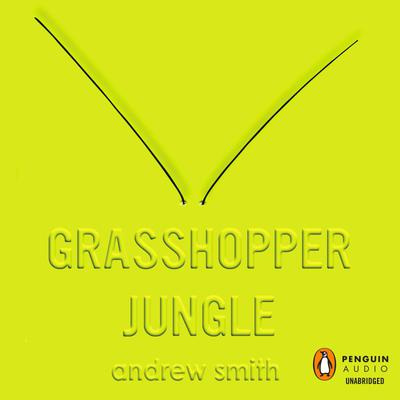 This is the truth. This is history.
It’s the end of the world. And nobody knows anything about it.
You know what I mean.

Funny, intense, complex, and brave, Grasshopper Jungle brilliantly weaves together everything from testicle-dissolving genetically modified corn to the struggles of recession-era, small-town America in this groundbreaking coming-of-age stunner.

“Andrew Smith is the bravest storyteller I know. Grasshopper Jungle is the most intelligent and gripping book I’ve read in over a decade. I didn’t move for two days until I had it finished. Trust me. Pick it up right now. It’s a masterpiece.” – A. S. King, Printz Honor-winning author of Ask the Passengers and Please Ignore Vera Dietz

“Grasshopper Jungle is about the end of the world. And everything in between.” – Alex London, author of Proxy

“In Grasshopper Jungle, it’s as if Andrew Smith is somehow possessed by the ghost of Kurt Vonnegut. This book is nothing short of a brilliant, hilarious thrill-ride that is instantly infectious. But, the most beautiful thing about Grasshopper Jungle has nothing to do with the absurd or out-of-this-world. It is the deft hand by which Smith explores teenage love and sexuality that is truly breathtaking. In writing a history of the end of the world, Smith may have just made history himself.” – John Corey Whaley, Printz Award-winning author of Where Things Come Back