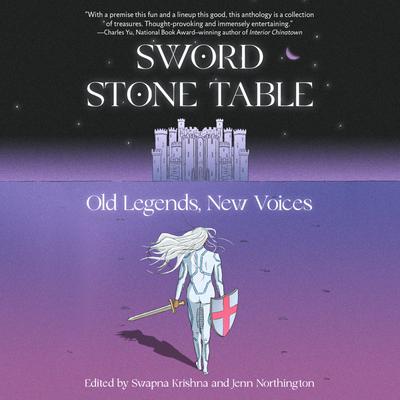 From the vast lore surrounding King Arthur, Camelot, and the Knights of the Round Table, comes an anthology of gender-bent, race-bent, LGBTQIA+ inclusive retellings. Featuring stories by:

Here you’ll find the Lady of the Lake reimagined as an albino Ugandan sorceress and the Lady of Shalott as a wealthy, isolated woman in futuristic Mexico City; you'll see Excalibur rediscovered as a baseball bat that grants a washed-up minor leaguer a fresh shot at glory and as a lost ceremonial drum that returns to a young First Nations boy the power and the dignity of his people. There are stories set in Gilded Age Chicago, '80s New York, twenty-first century Singapore, and space; there are lesbian lady knights, Arthur and Merlin reborn in the modern era for a second chance at saving the world and falling in love—even a coffee shop AU.

Brave, bold, and groundbreaking, the stories in Sword Stone Table will bring fresh life to beloved myths and give long-time fans a chance to finally see themselves in their favorite legends.

Audiobook Table of Contents:
"The Once and Future Qadi" by Ausma Zehanat Khan, read by Ali Nasser
"Passing Fair and Young" by Roshani Chokshi, read by Soneela Nankani
"How, after Long Fighting, Galehaut WasOvercome by Lancelot Yet Was Not Slainand Made Great Speed to Yield to Friendship;Or, Galehaut, the Knight of the Forfeit" by Daniel M. Lavery, read by Em Grossland
"I Being Young and Foolish" by Nisi Shawl, read by Amani Starnes
"The Bladesmith Queen" by Sarah MacLean, read by Lena Lee
"Do, By All Due Means" by Sive Doyle, read by Jeena Yi
"Mayday" by Maria Dahvana Headley, read by Joel Froomkin
"Heartbeat" by Waubgeshig Rice, read by Shaun Taylor-Corbett
"Jack and Brad and the Magician" by Anthony Rapp, read by the author
"The Quay Stone" by S. Zainab Williams, read by Shanta Parasuraman
"Black Diamond" by Alex Segura, read by Omar Leyva
"Flat White" by Jessica Plummer, read by Laya Lewis
"Once (Them) & Future (Us)" by Preeti Chhibber, read by Deepti Gupta
"A Shadow in Amber" by Silvia Moreno-Garcia, read by Gisela Chipe
"White Hempen Sleeves" by Ken Liu, read by Dani Martineck
"Little Green Men" by Alexander Chee, read by Vikas Adam