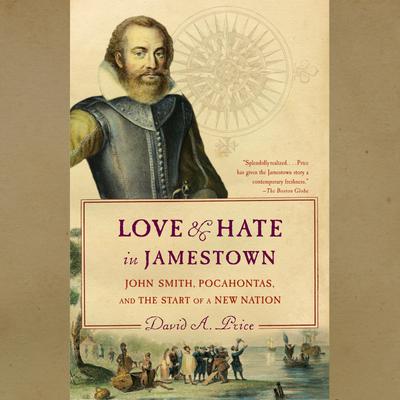 Love and Hate in Jamestown

John Smith, Pocahontas, and the Start of a New Nation

A gripping narrative of one of the great survival stories of American history: the opening of the first permanent English settlement in the New World. Drawing on period letters and chronicles, and on the papers of the Virginia Company–which financed the settlement of Jamestown–David Price tells a tale of cowardice and courage, stupidity and brilliance, tragedy and costly triumph. He takes us into the day-to-day existence of the English men and women whose charge was to find gold and a route to the Orient, and who found, instead, hardship and wretched misery. Death, in fact, became the settlers’ most faithful companion, and their infighting was ceaseless.

Price offers a rare balanced view of the relationship between the settlers and the natives. He unravels the crucial role of Pocahontas, a young woman whose reality has been obscured by centuries of legend and misinformation (and, more recently, animation). He paints indelible portraits of Chief Powhatan, the aged monarch who came close to ending the colony’s existence, and Captain John Smith, the former mercenary and slave, whose disdain for class distinctions infuriated many around him–even as his resourcefulness made him essential to the colony’s success.

Love and Hate in Jamestown is a superb work of popular history, reminding us of the horrors and heroism that marked the dawning of our nation.