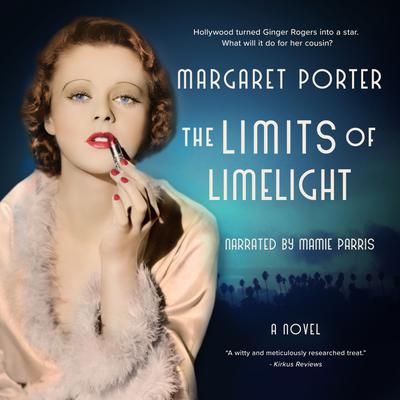 The Limits of Limelight

From the author of the award-winning Beautiful Invention: A Novel of Hedy Lamarr, an engrossing, fact-based story of a young woman's quest to achieve her rightful destiny.

Pretty Oklahoma teenager Helen Nichols accepts an invitation from her cousin, rising movie actress Ginger Rogers, and her Aunt Lela, to try her luck in motion pictures. Her relatives, convinced that her looks and personality will ensure success, provide her with a new name and help her land a contract with RKO. As Phyllis Fraser, she swiftly discovers that Depression-era Hollywood’s surface glamour and glitter obscure the ceaseless struggle of the hopeful starlet.

Lela Rogers, intensely devoted to her daughter and her niece, outwardly accepting of her stage mother label, is nonetheless determined to establish her reputation as screenwriter, stage director, and studio talent scout. For Phyllis, she’s an inspiring model of grit and persistence in an industry run by men.

While Ginger soars to the heights of stardom in musicals with Fred Astaire, Phyllis is tempted by a career more fulfilling than the one she was thrust into. Should she continue working in films, or devote herself to the profession she’s dreamed about since childhood? Which choice might lead her to the lasting love that seems so elusive?