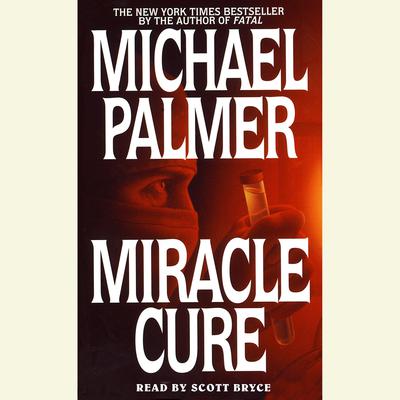 With each successive bestseller, including Extreme Measures and Critical Judgment, ER physician turned author Michael Palmer sets a new standard for medical suspense...writing "wrenchingly scary," (Publishers Weekly) "chillingly sinister"(Denver Post) novels packed with all the cutting-edge authenticity only a doctor could prescribe.  Now, in Miracle Cure, Michael Palmer delivers his most electrifying thriller yet, as an unsuspecting doctor seeks the truth behind a miracle drug...and uncovers a deadly conspiracy.

An agonizing sports injury did more than end Brian Holbrook's professional football dreams.  It left the skilled cardiologist with an addiction to prescription painkillers that eventually cost him his marriage and his license to practice medicine.  But now, at thirty-eight, Brian's cleaned up his act, swallowed his pride, and is ready to start over.  Yet how far is he willing to go to be a doctor again?

The prestigious Boston Heart Institute, home of some of the world's top surgeons and cardiologists, has offered Brian an opportunity to get back into scrubs...and participate in trials of an extraordinary new drug that could revolutionize medicine.  Vasclear may have the power to reverse arteriosclerosis, the number one killer in the civilized world.  In short, it offers the promise of a pharmaceutical fountain of youth.

The initial results are so dazzling, Brian pushes to get his own father, who has a dangerous heart condition, accepted into the Vasclear study.  But soon Brian is uneasy.  Under close scrutiny because of his past, he knows that the last thing he can afford to do is make waves--and yet he finds himself compelled to ask questions that his superiors can't, or won't, answer: Why crucial records have disappeared....  Why a patient who'd made startling progress has suddenly died....  With billions of dollars at stake in the race to get FDA approval for the drug, Brian's meddling could destroy his career--or worse.  For as Dr. Brian Holbrook is beginning to suspect, at Boston Heart Institute, knowing too much is the quickest way to the morgue.

From the corridors of a world-renowned temple of healing to the halls of Congress, an exercise in greed turns into an experiment in terror--in Miracle Cure, another suspense triumph from the new master of the medical thriller, Michael Palmer.