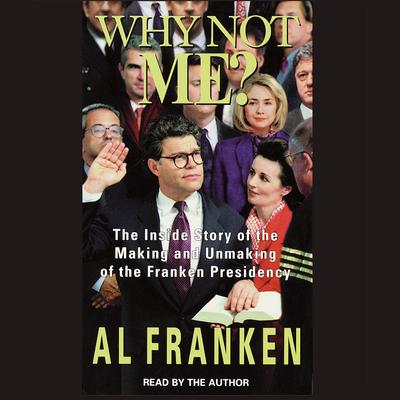 Why Not Me? - Abridged

First came Theodore White's The Making of the President, 1960. Then All the President's Men. Now the searing chronicle that will forever change the way we view the man and the office...

...chronicles the dramatic rise and dizzying fall of Al Franken, who would become the first Jewish president of the United States. Meet the president as a young man. Witness the Franken campaign in its infancy, as the candidate pledges "to walk the state of New Hampshire, diagonally and then from side to side." Go behind the scenes and meet Team Franken, the candidate's brain trust: including brother and deputy campaign manager Otto, a recovering sex addict and alcoholic, and campaign manager Norm Ornstein, the think-tank policy wonk who masterminds the single-issue (ATM fees) campaign. Cheer as Franken stuns the pundits by defeating Al Gore for the Democratic nomination, then is swept into office carrying all fifty states and the District of Columbia.

Then, through excerpts from Bob Woodward's detailed account of the first hundred days, The Void, go inside the Franken White House, which is gripped by crisis from day one. After the highly medicated chief executive exhibits a roller coaster of bipolar behavior, Franken is forced to cooperate with the Joint Congressional Committee on the President's Mood Swings. And when the committee releases Franken's personal diaries to the public, his presidency faces its ultimate crisis.


It began on a cold day in January, when Alan Stuart Franken took the oath of office and became the 44th President of the United States. It ended 144 tumultuous days later with the words: "Boy, am I sorry." Here for the first time in paperback is the searing chronicle of Al Franken's journey to the White House--the visionary campaign, the landslide victory, the hookers, the payoffs--told through confessions of key aides, Franken's own diaries, and excerpts from Bob Woodward's book on the first 100 days of the Franken Presidency, entitled The Void.

Witness the campaign in its infancy, as Franken decides to run on a single-issue platform: lower ATM Fees. Follow along as Team Franken canvasses the nation, attacking Al Gore, attacking U.S. banks, attending a couple of prayer breakfasts. Then go inside the Franken White House where for 144 days a President virtually reinvents the office, boldly appointing the first all-Jewish cabinet, then battling a severe case of Chronic Fatigue Syndrome. As scandal rocks the Administration, Why Not Me? becomes a tragic American morality tale: of a man who dared to believe that anyone could be president--and paid the price for proving he was right. -->