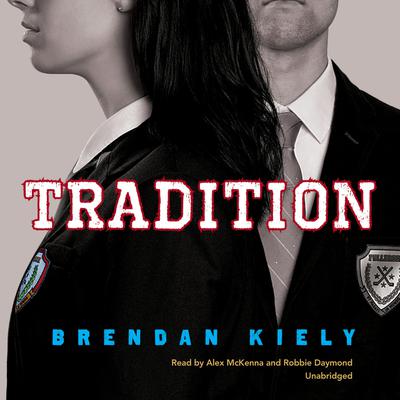 “In “Tradition,” a compelling story of privilege, prominence and prestige at Fullbrook Academy, Brendan Kiely tackles the difficult topic of rape and its cultural prevalence in present society. Meet legacy Jules Devereaux, hoping to shuffle through her senior year without incident and blackballed James Baxter, a blue-collar boy given a second chance with a full-ride hockey scholarship. While questioning the rules of the institution and their precarious positions within, Jules and James form an unlikely alliance ready to topple Fullbrook’s fail-safe existence. Kiely has created a powerful tale sure to ignite a conscious conversation and add momentum to the ever present #MeToo movement.”

From New York Times bestselling and award-winning author Brendan Kiely, a stunning new novel that explores the insidious nature of tradition at a prestigious boarding school.

Prestigious. Powerful. Privileged. This is Fullbrook Academy, an elite prep school where history looms in the leafy branches over its brick walkways. But some traditions upheld in its hallowed halls are profoundly dangerous.

Jules Devereux just wants to keep her head down, avoid distractions, and get into the right college, so she can leave Fullbrook and its old-boy social codes behind. She wants freedom, but ex-boyfriends and ex-best friends are determined to keep her in place.

Jamie Baxter feels like an imposter at Fullbrook, but the hockey scholarship that got him in has given him a chance to escape his past and fulfill the dreams of his parents and coaches, whose mantra rings in his ears: Don't disappoint us.

When Jamie and Jules meet, they recognize in each other a similar instinct for survival, but at a school where girls in the student handbook are rated by their looks, athletes stack hockey pucks in dorm room windows like notches on a bedpost, and school-sponsored dances push first year girls out into the night with senior boys, the stakes for safe sex, real love, and true friendship couldn't be higher.

As Jules and Jamie's lives intertwine, and the pressures to play by the rules and remain silent about the school's secrets intensify, they see Fullbrook for what it really is. That tradition, a word Fullbrook hides behind, can be ugly, even violent. Ultimately, Jules and Jamie are faced with the difficult question: can they stand together against classmates--and an institution--who believe they can do no wrong?