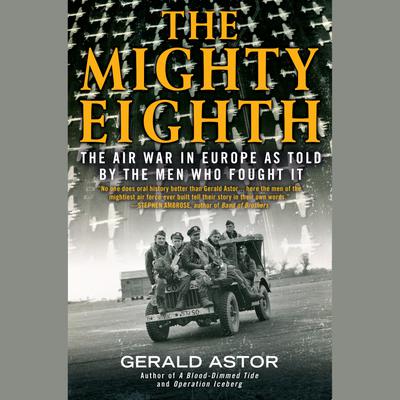 Europe has fallen. Pearl Harbor is in flames. Enter: the Eighth.

In 1941 the RAF fought a desperate battle of survival against the Luftwaffe over Britain. Then, from across the Atlantic, came a new generation of American pilots, gunners, and bombardiers, a new generation of flying machines called the B-17 Flying Fortress, the B-24 Liberator, the P-47 Thunderbolt, and the P-51 Mustang fighter. Soon these brave young men were hurtling themselves and their unproven planes across the Channel and into the teeth of enemy firepower, raining down bombs on the German military machine, and going up against Hitler's best fliers in the sky.

This is the dramatic oral history of the Army Air Corps and the newly created Eighth Air Force stationed in Britain, an army of hard-fighting, hard-playing flying men who suffered more fatalities than the entire U.S. Marine Corps in the Pacific campaign of World War II. Here, in their own words, are tales of survival and soul-numbing loss, of soldiers who came together to fight a kind of war that had never been fought before--and win it with their courage and their blood.


But the road to victory was paved with sacrifice. From its inaugural mission on July 4, 1942, until V-E Day, the Eighth Air Force lost more men than did the entire United States Marine Corps in all its campaigns in the Pacific. The Mighty Eighth chronicles the testimony of the pilots, bombardiers, navigators, and gunners who daily put their lives on the line. Their harrowing accounts recall the excitement and terror of dogfights against Nazi aces, maneuvering explosive-laden aircraft through deadly flak barrages, and fending off waves of enemy fighters while coping with subzero temperatures.

Beginning with the opening salvos from a mere dozen planes, crewmen describe the raids on Berlin and Dresden, the fiasco at Ploesti, Romania, and Black Thursday over Schweinfurt. They fell to the terror of seeing aircraft destroyed--helplessly watching as comrades crash and burn, or parachute over enemy territory, where they will attempt to evade enemy capture through the underground. Others tell of mourning downed airmen murdered by vengeful citizens and soldiers, and of those who endured captivity in POW camps. -->