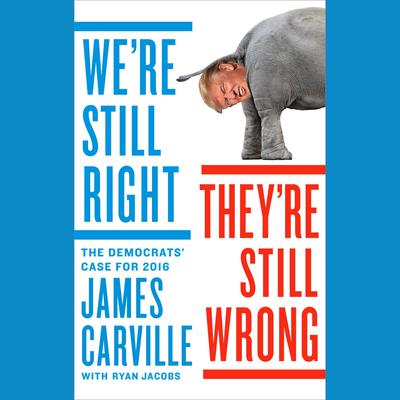 Now, twenty years after the book’s publication, Carville acknowledges that not much has changed. In fact, he maintains that it was the Democratic policies enacted by Presidents Clinton and Obama that salvaged America’s financial well-being during the last two decades, saving us from a collapse that George W. Bush and the Republican Congressional majorities inspired.

In We’re Still Right, They’re Still Wrong, Carville analyzes how the Republican party has ultimately failed to deliver on its promises and how Donald J. Trump—the party’s likely nominee in the 2016 presidential election—is the embodiment of that failure—and worse. Make no mistake, says Carville: Trump’s ascendance is no accident, but a revealing sign that the GOP is intellectually bankrupt and on the wrong side of today’s critical issues, including economic inequality and global warming. Written with Carville’s trademark sarcasm, folksiness, wit, and downhome common sense, We’re Still Right, They’re Still Wrong is a timely guide for voters, politicians, and journalists trying to make sense of our country’s most divisive and contentious election of the century.