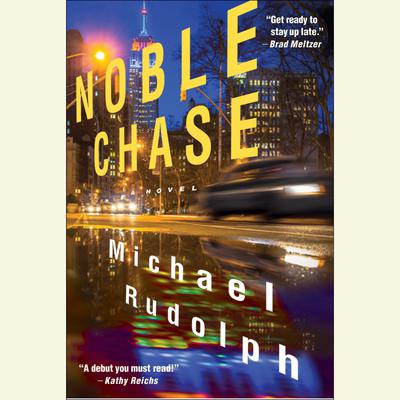 Perfect for fans of John Grisham, Greg Iles, and Linda Fairstein—this action-packed legal thriller debut races from the gleaming canyons of New York City to the hurricane-lashed waters of the Caribbean. Michael Rudolph’s Noble Chase combines a smart, determined heroine and a storm of stunning surprises in a pulse-pounding morality tale of international intrigue that delivers suspense right up to the shocking end.

Sic transit gloria. Beth Swahn, a young lawyer, makes a rookie mistake: She believes her client. While basking in the glory of winning a hundred-million-dollar judgment for a U.S. division of C. K. Leung’s Chinese conglomerate, Beth realizes that because of her naïveté, Leonard Sloane, president of the division, has absconded to the Caribbean with his banker girlfriend and seventy million dollars of the judgment money. Shortly thereafter, they are both presumed dead when a Mayday call to the Coast Guard reports the sinking of their yacht.

Stunned, furious, and determined to retrieve Leung’s money and save her firm from bankruptcy, Beth investigates her way through a maze of money laundering and white-collar corruption. When the trail leads her to Sloane’s handsome son, she is torn between her attraction to him and her fear that he may be involved in the theft. Beth is not alone in her search for the money. C. K. Leung is also involved, because he doubts Beth’s innocence. When her investigation moves to a critical level and a missing encrypted file comes to light that has the power to ignite a geopolitical firestorm, Leung becomes convinced that Beth is a party to Sloane’s scheme, and her life becomes violently threatened.

“Noble Chase is exactly that: heart-stabbing adventures at sea and in the courtroom, with lives—and millions—at stake. Get ready to stay up late.”—Brad Meltzer

“From the inner chambers of Manhattan’s legal scene to the jet-setting world of international business, this gripping thriller takes you to exotic places while keeping you on the edge of your seat. Noble Chase is a debut you must read!”—Kathy Reichs

“Not only is Rudolph’s novel a decidedly entertaining legal thriller, but there’s also an exciting chase on the high seas. Illegal financial practices form the basis for a ruthless tale that will captivate and challenge readers to discover the guilty. . . . It’s fun to follow the breadcrumbs.”—RT Book Reviews