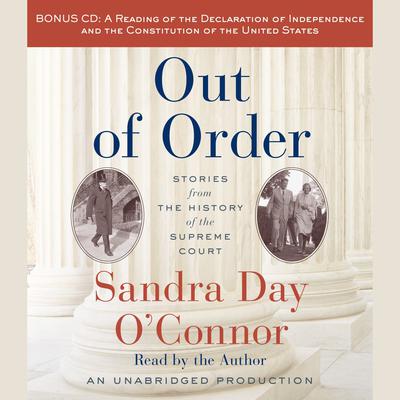 Stories from the History of the Supreme Court

“I called this book Out of Order because it reflects my goal, which is to share a different side of the Supreme Court. Most people know the Court only as it exists between bangs of the gavel, when the Court comes to order to hear arguments or give opinions. But the stories of the Court and the Justices that come from the ‘out of order’ moments add to the richness of the Court as both a branch of our government and a human institution.”—Justice Sandra Day O’Connor

From Justice Sandra Day O’Connor, the first woman to sit on the United States Supreme Court, comes this fascinating book about the history and evolution of the highest court in the land.

Out of Order sheds light on the centuries of change and upheaval that transformed the Supreme Court from its uncertain beginnings into the remarkable institution that thrives and endures today. From the early days of circuit-riding, when justices who also served as trial judges traveled thousands of miles per year on horseback to hear cases, to the changes in civil rights ushered in by Earl Warren and Thurgood Marshall; from foundational decisions such as Marbury vs. Madison to modern-day cases such as Hamdi vs. Rumsfeld, Justice O’Connor weaves together stories and lessons from the history of the Court, charting turning points and pivotal moments that have helped define our nation’s progress.

With unparalleled insight and her unique perspective as a history-making figure, Justice O’Connor takes us on a personal exploration, painting vivid pictures of Justices in history, including Oliver Wendell Holmes Jr., one of the greatest jurists of all time; Thurgood Marshall, whose understated and succinct style would come to transform oral argument; William O. Douglas, called “The Lone Ranger” because of his impassioned and frequent dissents; and John Roberts, whom Justice O’Connor considers to be the finest practitioner of oral argument she has ever witnessed in Court. We get a rare glimpse into the Supreme Court’s inner workings: how cases are chosen for hearing; the personal relationships that exist among the Justices; and the customs and traditions, both public and private, that bind one generation of jurists to the next—from the seating arrangements at Court lunches to the fiercely competitive basketball games played in the Court Building’s top-floor gymnasium, the so-called “highest court in the land.”

“In this delightful collection of tales, Sandra Day O’Connor shows us the personal side of the Supreme Court while reminding us of the critical role the Court plays. It’s a lovely book—and a valuable treasure for all Americans.”—Walter Isaacson, author of Steve Jobs