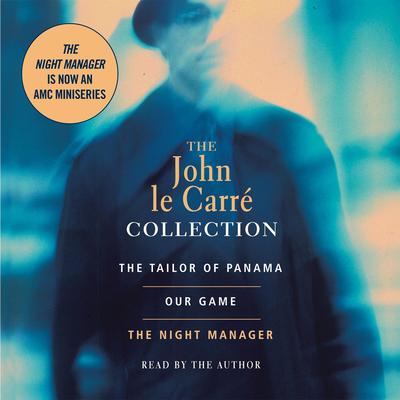 Tailor of Panama, Our Game, and Night Manager

The collection is sure to please avid LeCarre fans and new listeners alike.

Includes: Night Manager, Tailor of Panama, and Our Game

Night Manager
Enter the new world of post Cold War espionage. Penetrate the secret world of ruthless arms dealers and drug smugglers who have risen to unthinkable power and wealth. The sinister master of them all is an untouchable Englishman named Roper. Slipping into this maze of peril is a former British soldier, Jonathan Pine, who knows Roper well enough to hate him more than any man on earth. Now Personal vengeance is only part of why Pine is willing to help the men at Whitehall try to bring Roper down....
A Main Selection of the Book-of-the-Month Club

Our Game
With the Cold War fought and won, British spymaster Tim Cranmer accepts early retirement to rural England and a new life with his alluring young mistress Emma. But when both Emma and Cranmer's star double agent and lifelong rival, Larry Pettifer, disappear, Cranmer is suddenly on the run, searching for his brilliant protégé, desperately eluding his former colleagues, in a frantic journey across Europe and into the lawless, battered landscapes of Moscow and southern Russia, to save whatever of his life he has left....

Tailor of Panama
Le Carre's Panama is a Casablanca without heroes, a hotbed of drugs, laundered money and corruption. It is also the country which on December 31, 1999, will gain full control of the Panama Canal. Seldom has the weight of politics descended so heavily on such a tiny and unprepared nation. And seldom has the hidden eye of the British Intelligence selected such an unlikely champion as Harry Pendel - a charmer, a dreamer, an evader, a fabulist and presiding genius to the house of Pendel & Braithwaite Co. Limitada, Tailors to Royalty, formerly of London and presently of Panama City. Yet there is a logic to the spies' choice, for everybody who is anybody in Cental America passes through Pendel's doors. He dresses politicos and crooks and conmen. His fitting room hears more confidences than the priest's confessional. And when Harry Pendel doesn't hear things as such - well, he hears them anyway, by other means. In a thrilling, hilarious AudioBook, le Carre once again effortlessly expands the borders of the spy story to bring us a magnificent entertainment straight out of the pages of tomorrow's history.