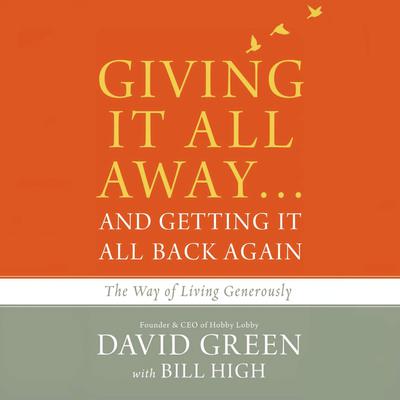 The Way of Living Generously

Generosity. It's the foundation for building a lasting legacy not just of money but also of the enduring values of faith, family, and openhanded living. In this book--part memoir, part personal manifesto--David Green shares lessons that can help you reap benefits for multiple generations.

In 1970, Green began making picture frames in his garage. With hard work, he and his wife, Barbara, turned that grassroots beginning into the world's largest privately owned arts-and-crafts retailer, employing thirty-two thousand people in more than seven hundred stores across forty-seven states.

Green's story includes inside details of the 2014 Supreme Court case over Hobby Lobby's right-to-life stance. But it's not all about business. Giving It All Away . . . and Getting It All Back Again changes the paradigm by emphasizing that true wealth is more than money--it's about faith, family, intellectual capital, and spiritual capital.

He has stayed true to this philosophy by adhering to three principles, which he shares in the book:

Green sees the life of giving as a life of adventure. But it's a life that pays the best rewards personally, offers a powerful legacy to your family, and changes those you touch.