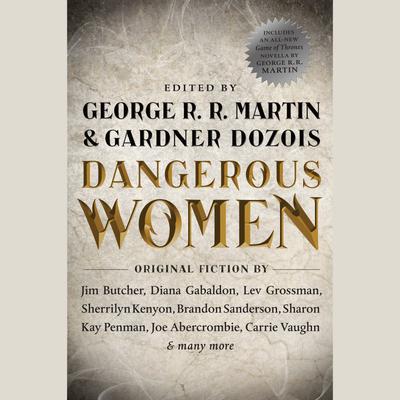 All new and original to this volume, the 21 stories in Dangerous Women include work by twelve New York Times bestsellers, and seven stories set in the authors’ bestselling continuities—including a new “Outlander” story by Diana Gabaldon, a  tale of Harry Dresden’s world by Jim Butcher, a story from Lev Grossman set in the world of The Magicians, and a 35,000-word novella by George R. R. Martin about the Dance of the Dragons, the vast civil war that tore Westeros apart nearly two centuries before the events of A Game of Thrones.

Writes Gardner Dozois in his Introduction, “Here you’ll find no hapless victims who stand by whimpering in dread while the male hero fights the monster or clashes swords with the villain, and if you want to tie these women to the railroad tracks, you’ll find you have a real fight on your hands.  Instead, you will find sword-wielding women warriors, intrepid women fighter pilots and far-ranging spacewomen, deadly female serial killers, formidable female superheroes, sly and seductive femmes fatale, female wizards, hard-living Bad Girls, female bandits and rebels, embattled survivors in Post-Apocalyptic futures, female Private Investigators, stern female hanging judges, haughty queens who rule nations and whose jealousies and ambitions send thousands to grisly deaths, daring dragonriders, and many more.”

Stories and Narrators (in order of appearance):
“Some Desperado” by Joe Abercrombie; Read by Stana Katic
“My Heart Is Either Broken” by Megan Abbott; Read by Jake Weber
“Nora’s Song” by Cecelia Holland; Read by Harriet Walter
“The Hands That Are Not There” by Melinda Snodgrass; Read by Jonathan Frakes
“Bombshells” by Jim Butcher; Read by Emily Rankin
“Raisa Stepanova” by Carrie Vaughn; Read by Inna Korobkina
“Wrestling Jesus” by Joe R. Lansdale; Read by Scott Brick
“Neighbors” by Megan Lindholm; Read by Lee Meriwether
“I Know How to Pick ’Em” by Lawrence Block; Read by Jake Weber
“Shadows for Silence in the Forests of Hell” by Brandon Sanderson; Read by Claudia Black
“A Queen in Exile” by Sharon Kay Penman; Read by Harriet Walter
“The Girl in the Mirror” by Lev Grossman; Read by Sophie Turner
“Second Arabesque, Very Slowly” by Nancy Kress; Read by Janis Ian
“City Lazarus” by Diana Rowland; Read by Scott Brick
“Virgins” by Diana Gabaldon; Read by Allan Scott-Douglas
“Pronouncing Doom” by S.M. Stirling; Read by Stana Katic
“Name the Beast” by Sam Sykes; Read by Claudia Black
“Caregivers” by Pat Cadigan; Read by Janis Ian
“Lies My Mother Told Me” by Caroline Spector; Read by Maggi-Meg Reed
“Hell Hath No Fury” by Sherilynn Kenyon; Read by Jenna Lamia
“The Princess and the Queen” by George R. R. Martin; Read by Iain Glen

The introduction by Gardner Dozois is read by Fred Sanders and the interstitial author biographies are read by Karen Dotrice.