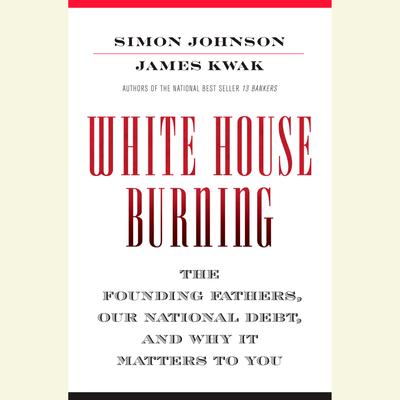 The Founding Fathers, Our National Debt, and Why It Matters to You

America is mired in debt—more than $30,000 for every man, woman, and child. Bitter fighting over deficits, taxes, and spending bedevils Washington, D.C., even as partisan gridlock has brought the government to the brink of default. Yet the more politicians on both sides of the aisle rant and the citizenry fumes, the more things seem to remain the same.

In White House Burning, Simon Johnson and James Kwak—authors of the national best seller 13 Bankers and cofounders of The Baseline Scenario, a widely cited blog on economics and public policy—demystify the national debt, explaining whence it came and, even more important, what it means to you and to future generations. They tell the story of the Founding Fathers’ divisive struggles over taxes and spending. They chart the rise of the almighty dollar, which makes it easy for the United States to borrow money. They account for the debasement of our political system in the 1980s and 1990s, which produced today’s dysfunctional and impotent Congress. And they show how, if we persist on our current course, the national debt will harm ordinary Americans by reducing the number of jobs, lowering living standards, increasing inequality, and forcing a sudden and drastic reduction in the government services we now take for granted.

But Johnson and Kwak also provide a clear and compelling vision for how our debt crisis can be solved while strengthening our economy and preserving the essential functions of government. They debunk the myth that such crucial programs as Social Security and Medicare must be slashed to the bone. White House Burning looks squarely at the burgeoning national debt and proposes to defuse its threat to our well-being without forcing struggling middle-class families and the elderly into poverty.

Carefully researched and informed by the same compelling storytelling and lucid analysis as 13 Bankers, White House Burning is an invaluable guide to the central political and economic issue of our time. It is certain to provoke vigorous debate.