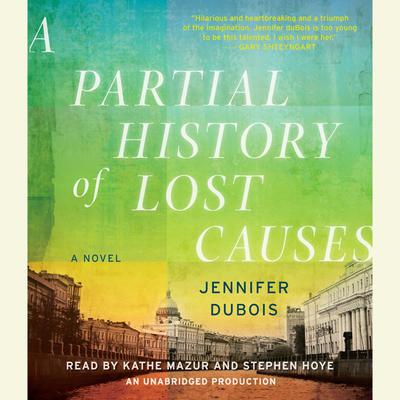 A Partial History of Lost Causes

FINALIST FOR THE PEN/HEMINGWAY PRIZE FOR DEBUT FICTION

In Jennifer duBois’s mesmerizing and exquisitely rendered debut novel, a long-lost letter links two disparate characters, each searching for meaning against seemingly insurmountable odds. With uncommon perception and wit, duBois explores the power of memory, the depths of human courage, and the endurance of love.

“Astonishingly beautiful and brainy . . . [a] stunning novel.”—O: The Oprah Magazine

In St. Petersburg, Russia, world chess champion Aleksandr Bezetov begins a quixotic quest: He launches a dissident presidential campaign against Vladimir Putin. He knows he will not win—and that he is risking his life in the process—but a deeper conviction propels him forward.

In Cambridge, Massachusetts, thirty-year-old English lecturer Irina Ellison struggles for a sense of purpose. Irina is certain she has inherited Huntington’s disease—the same cruel illness that ended her father’s life. When Irina finds an old, photocopied letter her father wrote to the young Aleksandr Bezetov, she makes a fateful decision. Her father asked the chess prodigy a profound question—How does one proceed in a lost cause?—but never received an adequate reply. Leaving everything behind, Irina travels to Russia to find Bezetov and get an answer for her father, and for herself.

Praise for A Partial History of Lost Causes

“DuBois is precise and unsentimental. . . . She moves with a magician’s control between points of view, continents, histories, and sympathies.”—The New Yorker

“Terrific . . . In urgent fashion, duBois deftly evokes Russia’s political and social metamorphosis over the past thirty years through the prism of this particular and moving relationship.”—Publishers Weekly (starred review)

“Hilarious and heartbreaking and a triumph of the imagination.”—Gary Shteyngart