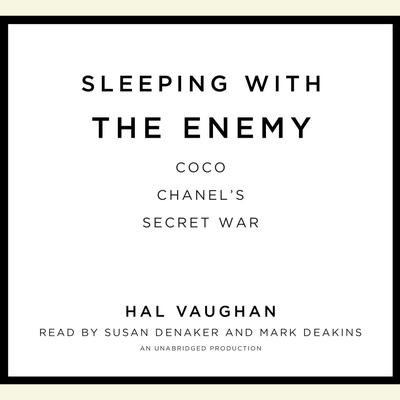 Sleeping with the Enemy

“From this century, in France, three names will remain: de Gaulle, Picasso, and Chanel.” –André Malraux

Coco Chanel created the look of the modern woman and was the high priestess of couture.

She believed in simplicity, and elegance, and freed women from the tyranny of fashion. She inspired women to take off their bone corsets and cut their hair. She used ordinary jersey as couture fabric, elevated the waistline, and created bell-bottom trousers, trench coats, and turtleneck sweaters.

In the 1920s, when Chanel employed more than two thousand people in her workrooms, she had amassed a personal fortune of $15 million and went on to create an empire.

Jean Cocteau once said of Chanel that she had the head of “a little black swan.” And, added Colette, “the heart of a little black bull.”

At the start of World War II, Chanel closed down her couture house and went across the street to live at the Hôtel Ritz. Picasso, her friend, called her “one of the most sensible women in Europe.” She remained at the Ritz for the duration of the war, and after, went on to Switzerland.

For more than half a century, Chanel’s life from 1941 to 1954 has been shrouded in vagueness and rumor, mystery and myth. Neither Chanel nor her many biographers have ever told the full story of these years.

Now Hal Vaughan, in this explosive narrative—part suspense thriller, part wartime portrait—fully pieces together the hidden years of Gabrielle “Coco” Chanel’s life, from the Nazi occupation of Paris to the aftermath of World War II.

Vaughan reveals the truth of Chanel’s long-whispered collaboration with Hitler’s high-ranking officials in occupied Paris from 1940 to 1944. He writes in detail of her decades-long affair with Baron Hans Günther von Dincklage, “Spatz” (“sparrow” in English), described in most Chanel biographies as being an innocuous, English-speaking tennis player, playboy, and harmless dupe—a loyal German soldier and diplomat serving his mother country and not a member of the Nazi party.

In Vaughan’s absorbing, meticulously researched book, Dincklage is revealed to have been a Nazi master spy and German military intelligence agent who ran a spy ring in the Mediterranean and in Paris and reported directly to Nazi propaganda minister Joseph Goebbels, right hand to Hitler.

The book pieces together how Coco Chanel became a German intelligence operative; how and why she was enlisted in a number of spy missions; how she escaped arrest in France after the war, despite her activities being known to the Gaullist intelligence network; how she fled to Switzerland for a nine-year exile with her lover Dincklage. And how, despite the French court’s opening a case concerning Chanel’s espionage activities during the war, she was able to return to Paris at age seventy and triumphantly resurrect and reinvent herself—and rebuild what has become the iconic House of Chanel.