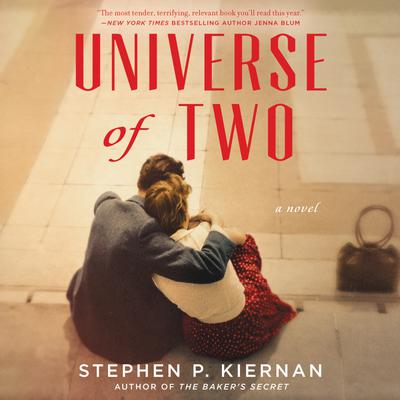 “Many people were involved in the creation of the atomic bomb in the mid-1940s, and Charles Fisk was one of them. Like many of those developmental scientists and engineers, Fisk remained deeply troubled and forever changed by the outcome of his efforts. This finely crafted love story—and a love story it is—weaves a well-researched history of the shrouded creation of the atomic bomb with the blossoming love of two people. Kiernan’s work exposes a terrifying truth and renders a valuable education while pulling the reader into a fast-paced narrative of love and loss.”

From the critically acclaimed author of The Baker’s Secret and The Curiosity comes a novel of conscience, love, and redemption—a fascinating fictionalized account of the life of Charlie Fisk, a gifted mathematician who was drafted into Manhattan Project and ordered against his morals to build the detonator for the atomic bomb. With his musician wife, he spends his postwar life seeking redemption—and they find it together.

Graduating from Harvard at the height of World War II, brilliant mathematician Charlie Fish is assigned to the Manhattan Project. Working with some of the age’s greatest scientific minds, including J. Robert Oppenheimer, Enrico Fermi, and Leo Szilard, Charlie is assigned the task of designing and building the detonator of the atomic bomb.

As he performs that work Charlie suffers a crisis of conscience, which his wife, Brenda—unaware of the true nature of Charlie’s top-secret task—mistakes as self-doubt. She urges him to set aside his qualms and continue. Once the bombs strike Hiroshima and Nagasaki, the feelings of culpability devastate him and Brenda.

At the war’s end, Charlie receives a scholarship to pursue a PhD in physics at Stanford—an opportunity he and Brenda hope will allow them a fresh start. But the past proves inescapable. All any of his new colleagues can talk about is the bomb, and what greater atomic weapons might be on the horizon. Haunted by guilt, Charlie and Brenda leave Stanford and decide to dedicate the rest of their lives to making amends for the evil he helped to birth into the world.

Based on the life of the actual mathematician Charles B. Fisk, Universe of Two combines riveting historical drama with a poignant love story. Stephen Kiernan has conjured a remarkable account of two people struggling to heal their consciences and find peace in a world forever changed.