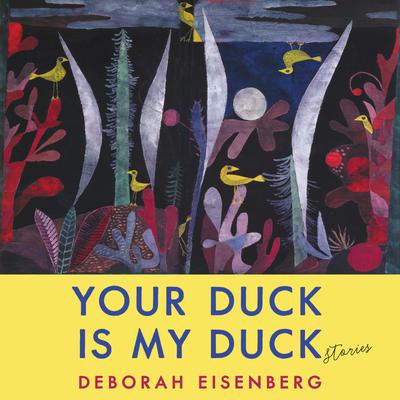 Your Duck Is My Duck

Your Duck Is My Duck

“A lot less known and heralded than she should be, Eisenberg is one of the finest short story writers working today. Her writing combines the command of character and setting of Alice Munro with the sharp humor and social skewering of George Saunders. Her stories are slyly observant, often edgy, usually funny, and always surprising in their turns and revelations. And they never fail to pack an emotional punch. Because it’s been more than a decade since her last collection of new work—Eisenberg is what is known as a “patient” writer—I, like the rest of her fans, will be lining up for this one.”

A much-anticipated collection of brilliantly observant short stories from one of the great American masters of the form, performed by a remarkable cast: Deborah Eisenberg, Julianne Moore, Josh Hamilton, and Wallace Shawn.

At times raucously hilarious, at times charming and delightful, at times as solemn and mysterious as a pond at midnight, Deborah Eisenberg’s stories gently compel us to confront the most disturbing truths about ourselves—from our intimate lives as lovers, parents, and children, to our equally troubling roles as citizens on a violent, terrifying planet.

Each of the six stories in Your Duck is My Duck, her first collection since 2006, has the heft and complexity of a novel. With her own inexorable but utterly unpredictable logic and her almost uncanny ability to conjure the strange states of mind and emotion that constitute our daily consciousness, Eisenberg pulls us as if by gossamer threads through her characters—a tormented woman whose face determines her destiny; a group of film actors shocked to read a book about their past; a privileged young man who unexpectedly falls into a love affair with a human rights worker caught up in an all-consuming quest that he doesn't understand.

In Eisenberg’s world, the forces of money, sex, and power cannot be escaped, and the force of history, whether confronted or denied, cannot be evaded. No one writes better about time, tragedy and grief, and the indifferent but beautiful universe around us.