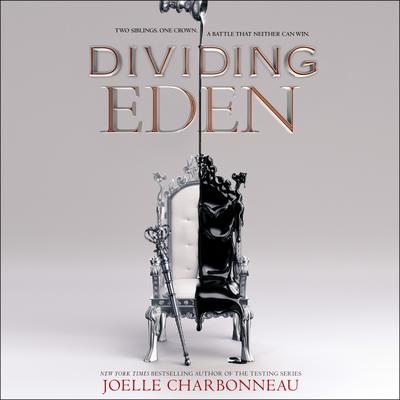 “With a monarchy in ruins, a queen descending into madness and unseen threats to the throne, twins Carys and Andreus find themselves facing a Trial of Succession to determine who shall rule Eden. While monsters run amuck in the mountains, the twins, who’ve hidden each others secrets from all outsiders, have little time to question the Council of Elders and their complicit plan to head the Hall of Virtues. Carys and Andreus are forced to fight each other through a series of tests to determine who will rule the throne. Will Carys and Andreus’s bond be broken beyond repair by a Trial of Succession or will they persevere and continue to protect each other through the peril and pandemonium?”

From the author of the New York Times bestselling The Testing trilogy comes a sweeping new fantasy series, perfect for fans of Victoria Aveyard and Sarah J. Maas.

Twins Carys and Andreus were never destined to rule Eden. With their older brother next in line to inherit the throne, the future of the kingdom was secure.

But appearances—and rivals—can be deceiving. When Eden’s king and crown prince are killed by assassins, Eden desperately needs a monarch, but the line of succession is no longer clear. With a ruling council scheming to gain power, Carys and Andreus are faced with only one option—to take part in a Trial of Succession that will determine which one of them is worthy of ruling the kingdom.

As sister and brother, Carys and Andreus have always kept each other safe—from their secrets, from the court, and from the monsters lurking in the mountains beyond the kingdom’s wall. But the Trial of Succession will test the bonds of trust and family.

With their country and their hearts divided, Carys and Andreus will discover exactly what each will do to win the crown. How long before suspicion takes hold and the thirst for power leads to the ultimate betrayal?