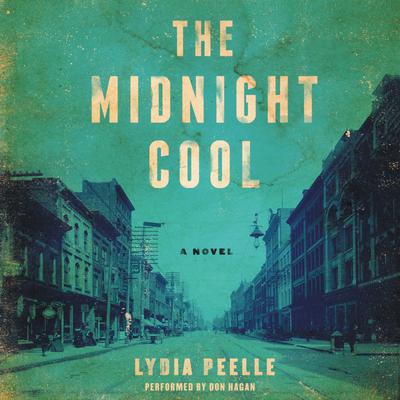 “The journey of middle-aged swindler Billy and his young, idealistic partner Charles is a journey into the history and heart of the oft-maligned American dream. As the nation considers whether it will join World War I, Billy and Charles must weigh the merits of freedom against patriotic obligation, their life on the road against the temptation of putting down roots, and their diverging desires against the love and loyalty they bear for each other. As Billy says, 'I reckon that's the beauty and the shame of it, all at once.' Peelle's exploration of this beauty and shame is exquisitely wrought, richly populated, and ultimately devastating. I finished the novel in tears.”

The Whiting Award—winning author of the story collection Reasons for and Advantages of Breathing delivers her enchanting debut novel, set in 1916 Tennessee: a rich and rewarding tale of two flawed yet endearing grifters who pursue women, wealth, and a surprisingly valuable commodity for the troops in Europe—mules.

A middle-aged Irish immigrant, Billy has a gift for illusion—making damaged objects look new. His companion, Charles, the smooth-tongued teenage son of a prostitute, is a natural salesman, just like the mythical father he’s never met. Longtime horse traders and partners, they’ve recently turned their talents to trading mules. But in the summer of 1916, these seasoned grifters skilled in the art of the underhanded deal have just been swindled themselves. They’re saddled with the one thing they may not be able to unload: a gorgeous, murderous black mare named The Midnight Cool.

Charles should have listened to Catherine, the beautiful, rebellious daughter of Leland Hatcher, the richest man in Richfield, Tennessee, and the former owner of The Midnight Cool. The horse would be worth a fortune—if she weren’t a verified man-killer who attacks on sight. Charles and Billy are rooted in this muggy town until they can miraculously retrain their recalcitrant mare, and in the shadow of the growing inevitability of war, their bond begins to fray. Falling in love with Catherine—and under the spell of the deceitful, wealthy Leland, the vision of himself he’d like to be—Charles pulls away from the older man.

Despite their growing distance, Billy and Charles find their business thriving when the war in Europe pushes the demand for mules sky-high and the United States enters the fight. But when a trade goes terribly wrong, Charles is forced to reevaluate his allegiance to his country, the moral implications of his lifestyle, his relationship with Catherine, and, ultimately, his mysterious and surprisingly deep connection to Billy.

Populated by spirited, memorable characters, The Midnight Cool is a startlingly profound tale of aspiration, loyalty, and love—and the eternal search for something lasting in a transitory world.