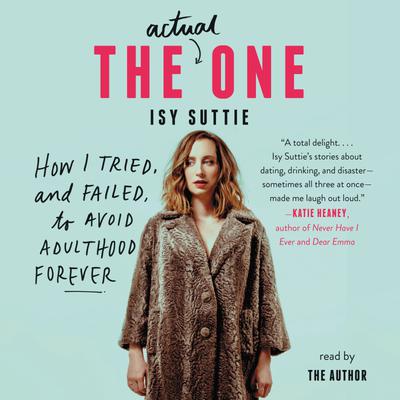 How I Tried, and Failed, to Avoid Adulthood Forever

A hilarious, razor-sharp debut memoir about the moment when you realize that your friends have all grown up and left you behind, for listeners of Caitlin Moran’s How To Be A Woman, Jenny Lawson’s Let’s Pretend This Never Happened, and Kelly Williams Brown’s Adulting.

Isy Suttie wakes up one day in her late twenties to discover that the deal she’d struck with her friends, to put off growing up for as long as possible, had been entirely in her head. Everyone around her is suddenly into mortgages, farmers’ markets, and going off the Pill, rather than running naked into the sea or getting hammered in a country pub with eighty-year-old men.

After a particularly crushing breakup precipitated by Isy’s gifting of a human-size papier-mâché penguin to her boyfriend, her dearest friend advises Isy not to worry: the next guy she meets will be The Actual One.

Heartened by this promise, Isy decides to keep delaying the onset of adulthood, whether that means standing on the side of a highway in nothing but an old fur coat and sneakers, dating a man who speaks only in rhyme, or conquering her fears of Alpine skiing by wildly overestimating her athletic ability. Insightful and laugh-out-loud funny, The Actual One is an ode to the confusing wilderness of your late twenties, alongside a quest for a genuinely good relationship . . . or at the very least, a good story to tell.