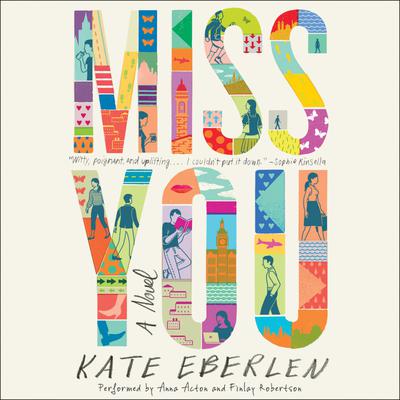 “Tess and Gus first cross paths in Florence as 18-year-olds with their futures stretching ahead of them. Back in England, they live their lives oblivious to all the near-misses and chances they have to encounter one another again. The meandering way their lives circle each other is charming rather than frustrating, but the heart of this book lies in the choices Tess and Gus make as their lives unfold in ways neither anticipated. Exceptionally poignant and filled with relatable and deeply human characters, this is a thoughtful story about how you can never quite guess what life has in store for you - and maybe that's for the best.”

"If ever a couple was ‘meant to be,’ it’s Tess and Gus. This is such a witty, poignant, and uplifting story of two lives crisscrossing over the years, with near miss after near miss. . . . I couldn’t put it down."—Sophie Kinsella

A wryly romantic debut novel with echoes of One Day that asks, what if you just walked by the love of your life, but didn’t even know it?

"TODAY IS THE FIRST DAY OF THE REST OF YOUR LIFE." Tess can’t get the motto from her mother’s kitchen knickknack out of her head, even though she’s in Florence on an idyllic vacation before starting university in London.

Gus is also visiting Florence, on a holiday with his parents seven months after tragedy shattered their lives. Headed to medical school in London, he’s trying to be a dutiful son but longs to escape and discover who he really is.

A chance meeting brings these eighteen-year-olds together for a brief moment—the first of many times their paths will crisscross as time passes and their lives diverge from those they’d envisioned. Over the course of the next sixteen years, Tess and Gus will face very different challenges and choices. Separated by distance and circumstance, the possibility of these two connecting once more seems slight.

But while fate can separate two people, it can also bring them back together again. . . .