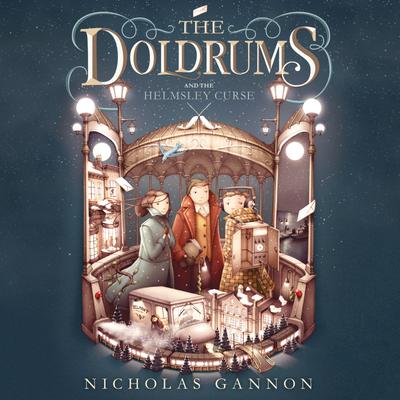 The Doldrums and the Helmsley Curse

The stand-alone sequel to The Doldrums, which the New York Times called “a dreamy charmer of a book,” is a second tour-de-force by author-illustrator Nicholas Gannon.

It brims with the spirit of exploration and celebrates the bond of friendship. The exquisite hardcover package features Gannon’s distinctive full color full-page art throughout, as well as black-and-white spot illustrations. The Doldrums and the Helmsley Curse is a timeless tale and a beautiful gift for a young reader.

Archer Helmsley’s grandparents—famous explorers who went missing on an iceberg two years ago—are finally coming home. Archer is overjoyed, but he may be the only one. Rumors are flying that Archer’s grandparents were never really abandoned on the iceberg; that they’re making it all up. Archer knows that the rumors are false. With his best friends, Oliver and Adélaïde, and their new neighbor, Kana, Archer sets out during a snowstorm to rescue his grandparents’ reputation.

In the tradition of Roald Dahl, Lemony Snicket, and Brian Selznick, Nicholas Gannon’s wildly imaginative world of The Doldrums and the Helmsley Curse is packed with sly humor, an undeniably charming cast of characters, and the thrill of discovering secrets and adventures right in your own backyard.

With approximately twenty pieces of full color full-page artwork, as well as spot illustrations, and deft, literary writing, Nicholas Gannon once again creates a fully realized world and a story to sink into and explore. “Irresistible.”—Booklist