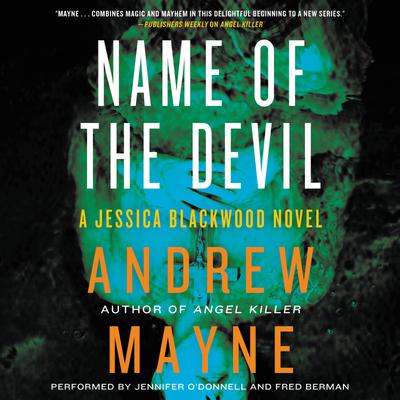 Name of the Devil

In this electrifying sequel to Angel Killer, magician-turned-FBI-agent Jessica Blackwood must channel her past to catch a killer consumed by a desire for revenge.

When a church combusts in rural Appalachia, the bizarre trail of carnage suggests diabolical forces are at work. Charged with explaining the inexplicable, the FBI's Dr. Ailes and Agent Knoll once again turn to the ace up their sleeve: Agent Jessica Blackwood, a former prodigy from a family dynasty of illusionists. After playing a pivotal role in the capture of the Warlock, a seemingly supernatural serial killer, Jessica can no longer ignore the world, and the skills, she left behind. Her talent and experience endow her with a knack for knowing when things are not always as they appear to be, and she soon realizes this explosion is just the first of many crimes.

As the death toll mounts, Jessica discovers the victims share a troubling secret with far-reaching implications that stretch from the hills of West Virginia to cartel-corrupted Mexico to the hallowed halls of the Vatican. Everyone involved in what happened on that horrible night so long ago has tried to bury it—except for one person, who believes that the past can be hidden, but never forgiven. Can Jessica draw on her unique understanding of the power and potential of deception to thwart a murderer determined to avenge the past?