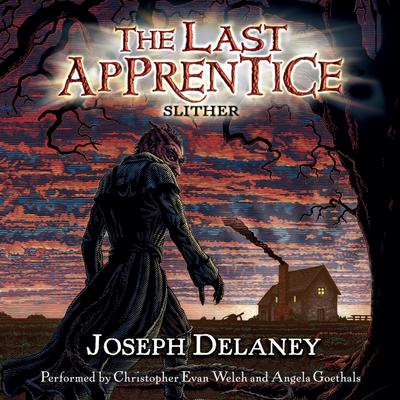 The eleventh volume in the spine-tingling, best-selling Last Apprentice series. In Slither, Joseph Delaney takes us far from the county, to a land where a spook has never set foot and where terrifying creatures of the dark thrive. Slither is one of these monsters, and Book 11 is his tale.

Slither has never heard of Tom Ward, the Spook, or Alice Deane. He thirsts for blood. He takes it from whatever he wants, animal or human. And he has his eyes on the home of a farmer and his three daughters. With his dying breath, the farmer offers Slither a bargain. If Slither will take his two youngest daughters to safety, the eldest daughter is his. A journey of horrors begins . . . and along the way Slither will meet Grimalkin, who is still searching for a way to destroy the Fiend for good.