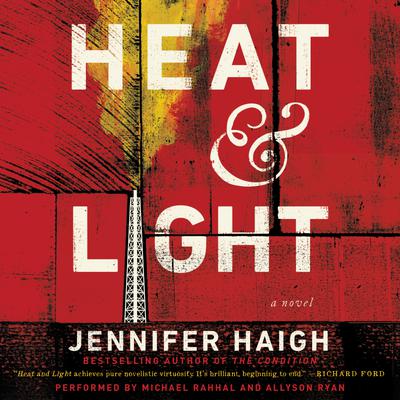 “Haigh has been building a body of work around Bakerton, Pennsylvania, for more than a decade. In this new novel, Haigh once again unleashes the sweep of historical forces as out-of-state companies look to drill for natural gas deposits. There is hope among residents that the future will be brighter, but there is also risk that they will just end up victims of greed and further environmental ruin. This is a big, issue oriented book, but its success is found in the brilliance with which Haigh crafts her characters and makes their lives a vehicle for looking at the moral, political, environmental, and economic questions about fracking. A timely book and perhaps one even worthy of the title 'Great American Novel'.”

Acclaimed New York Times bestselling author Jennifer Haigh returns to the Pennsylvania town at the center of her iconic novel Baker Towers in this ambitious, achingly human story of modern America and the conflicting forces at its heart—a bold, moving drama of hope and desperation, greed and power, big business and small-town families.

Forty years ago, Bakerton coal fueled the country. Then the mines closed, and the town wore away like a bar of soap. Now Bakerton has been granted a surprise third act: it sits squarely atop the Marcellus Shale, a massive deposit of natural gas.

To drill or not to drill? Prison guard Rich Devlin leases his mineral rights to finance his dream of farming. He doesn’t count on the truck traffic and nonstop noise, his brother’s skepticism or the paranoia of his wife, Shelby, who insists the water smells strange and is poisoning their frail daughter. Meanwhile his neighbors, organic dairy farmers Mack and Rena, hold out against the drilling—until a passionate environmental activist disrupts their lives.

Told through a cast of characters whose lives are increasingly bound by the opposing interests that underpin the national debate, Heat and Light depicts a community blessed and cursed by its natural resources. Soaring and ambitious, it zooms from drill rig to shareholders’ meeting to the Three Mile Island nuclear reactor to the ruined landscape of the “strippins,” haunting reminders of Pennsylvania’s past energy booms. This is a dispatch from a forgotten America—a work of searing moral clarity from one of the finest writers of her generation, a courageous and necessary book.