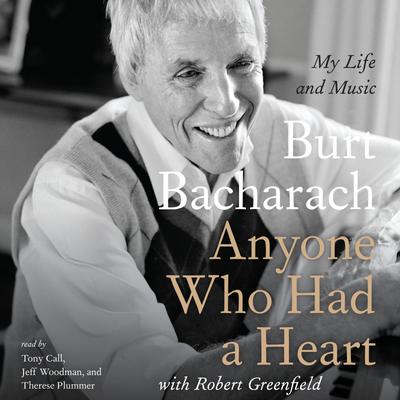 Anyone Who Had a Heart

My Life and Music

One of the greatest songwriters of all time offers a frank and riveting account of his life and the stories behind the hits.

Over the past six decades, Burt Bacharach's legendary songwriting has touched millions of devoted listeners all over the world. In Anyone Who Had a Heart, Bacharach steps out from behind the music to give an honest, engaging look at his life—from his work with Hal David, Dionne Warwick, Elvis Costello, and many others to his tumultuous marriages and the devastating fate of his beloved daughter.

Growing up in Forest Hills, New York, during the 1930s and '40s, Burt Bacharach fell in love with music after sneaking into a Manhattan jazz club to see the legendary Dizzy Gillespie. After a stint in the Army during the Korean War, he toured the world with Marlene Dietrich, wrote an endless string of hits, scored numerous Hollywood films, married the glamorous movie star Angie Dickinson, and composed the music for the huge Broadway hit Promises, Promises.

While he soared professionally, Bacharach's private life was dominated by the never-ending search for love—and the heartbreak that comes when it is lost—which is reflected in his greatest songs. His first three marriages ended in divorce. His long-running partnership with the late Hal David suffered a bitter split that lasted seventeen years. Throughout the highs and lows, Bacharach steadfastly pursued his muse—a quest that continues to this day.

Anyone Who Had a Heart is the story of a man who has always expressed his deepest feelings through his music. Filled with the emotional power that defines Burt Bacharach's most unforgettable songs, his memoir offers a candid backstage look at show business as well as the personal struggles of an artist whose incredible body of work has earned him a unique position in the American cultural landscape.