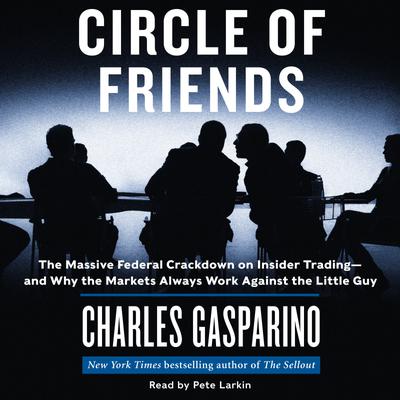 The bestselling author of The Sellout tells the explosive story of the government’s crackdown on insider-trading networks—an investigation that has already racked up more than 60 convictions.

In Circle of Friends, award-winning journalist Charles Gasparino—one of Wall Street's most knowledgeable observers—follows government investigators and prosecutors as they pursue one of the most aggressive and broad-reaching series of insider-trading cases in the nation's history. A richly textured page-turner of investigative journalism based on extensive reporting, Circle of Friends chronicles the massive federal crackdown that has already put some of the biggest names on Wall Street behind bars, including Raj Rajaratnam, founder of the Galleon Group, and Rajat Gupta, a former CEO of consulting giant McKinsey & Co. Other similarly sized targets are still waiting nervously, including the biggest one of them all—financial impresario Steve Cohen of SAC Capital, the giant hedge fund that has confounded regulators for years by cranking out a steady stream of market-busting returns.

Gasparino goes behind the headlines to reveal how the government makes its case, using every tool at its disposal—and at great expense to taxpayers—to supposedly make the investing world safer for average Americans. Gasparino asks why federal officials are so eager to prosecute these cases: What is the real damage to individuals? Do average investors really care? He explores why insider trading is all the rage these days when the U.S. government has failed to bring a single criminal case against the culprits who caused the 2008 financial crisis.

Circle of Friends is not a defense of insider trading, but it does offer an account of the politics of Wall Street crime fighting, revealing the behind-the-scenes ambitions that motivate headlines and burnish political careers.

A riveting work of narrative nonfiction, as engrossing and explosive as fictional thrillers of the finest magnitude, Circle of Friends is a wakeup call to the investing public.