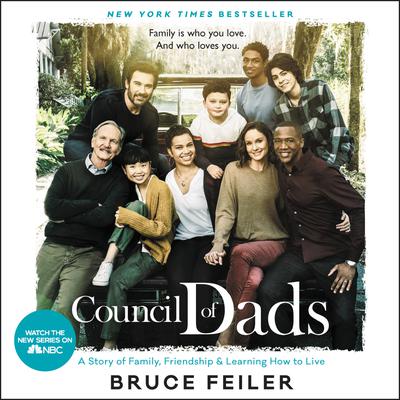 The Council of Dads

My Daughters, My Illness, and the Men Who Could Be Me

As a young dad, Bruce Feiler, New York Times bestselling author and television host, received shattering news. A rare form of cancer was threatening not only his life but his family's future as well. A singular question emerged: Who would be there for his wife and daughters if he were gone?

Feiler reached out to six extraordinary men who helped shape him and asked them to be present in the lives of his daughters. The Council of Dads is the unforgettable portrait of these men, who offer wisdom, humor, and guidance on how to live, how to love, how to question, how to dream.

The source for NBC's blockbuster series, here is a singular story that offers lessons for us all—helping us draw closer to the ones we love, appreciate what's most precious, and celebrate the power of community.

This audiobook includes an episode of the Book Club Girl Podcast, featuring an interview with Bruce Feiler about The Council of Dads.