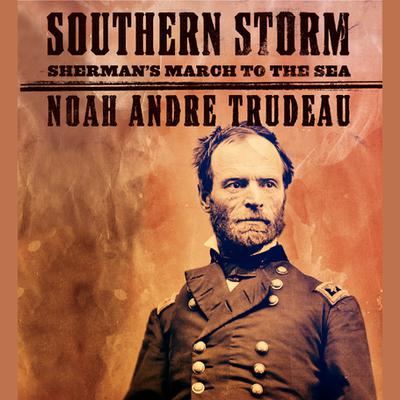 Sherman's March to the Sea

Award-winning Civil War historian Noah Andre Trudeau has written a gripping, definitive new account that will stand as the last word on General William Tecumseh Sherman's epic march—a targeted strategy aimed to break not only the Confederate army but an entire society as well. With Lincoln's hard-fought reelection victory in hand, Ulysses S. Grant, commander of the Union forces, allowed Sherman to lead the largest and riskiest operation of the war. In rich detail, Trudeau explains why General Sherman's name is still anathema below the Mason-Dixon Line, especially in Georgia, where he is remembered as "the one who marched to the sea with death and devastation in his wake."

Sherman's swath of destruction spanned more than sixty miles in width and virtually cut the South in two, badly disabling the flow of supplies to the Confederate army. He led more than 60,000 Union troops to blaze a path from Atlanta to Savannah, ordering his men to burn crops, kill livestock, and decimate everything that fed the Rebel war machine. Grant and Sherman's gamble worked, and the march managed to crush a critical part of the Confederacy and increase the pressure on General Lee, who was already under siege in Virginia.

Told through the intimate and engrossing diaries and letters of Sherman's soldiers and the civilians who suffered in their path, Southern Storm paints a vivid picture of an event that would forever change the course of America.