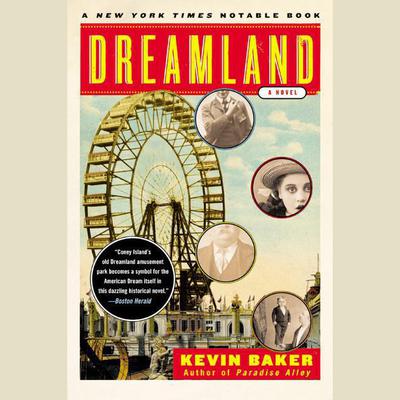 This is Dreamland, a uniquely fierce and magical tale that delivers both a sweeping chronicle of America at the turn of the century and an intimate, heart-wrenching portrait of the lives of its denizens. Among the thousands of immigrants who arrive in New York harbor is an Eastern European stowaway called Kid Twist, who soon earns his keep as an enforcer for the ruthless gangster Gyp the Blood. Soon though, Kid brutally splits with Gyp, leaving him bleeding from a shovel wound to the head in a rancid basement on the Lower East Side. His life now in jeopardy, Kid flees to Brooklyn, finding asylum with a Coney Island carny known as Trick the Dwarf.

While hiding out, Kid meets young Esther Abramowitz, a shirtwaist seamstress who labors under inhumane conditions. As their love affair blossoms, Esther emerges from quiet shop worker to foot soldier in the burgeoning labor movement. Changed by love, Kid, too, is no longer the ruthless scavenger he once was, as he prepares for an electrifying showdown with the vengeful Gyp the Blood.

Kevin Baker's deftly imagined blend of meticulous historical research and assured narrative invention recreates a world bursting at the seams, a world of freak shows, cataclysmic exhibitions, mad dwarves, and bathing beauties. In prose that is at once ferocious and breathtakingly lyrical, Dreamland weaves a richly layered tapestry that captures perfectly the emotional and psychological essence of the American experience at the dawn of a new age.