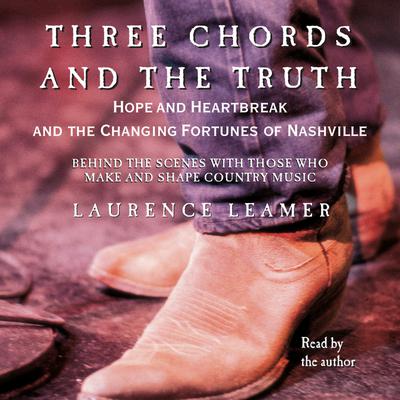 THREE CHORDS AND THE TRUTH - Abridged

Every June, in gratitude to their devoted fans, the stars of country music appear at the Tennessee State Fairgrounds to sign autographs for hours and perform during the week called Fan Fair. Though the 1996 Fan Fair was a phenomenal success, for Nashville itself it was also a time of doubt, uncertainty and dramatic change. The week was like a country song: intense, emotional, filled with joy and disappointment, passion and dismay, laughter and tears.

Fan Fair is the setting for this extraordinary inside look at country music. Laurence Leamer had unprecedented access to the stars, managers, songwriters and record company execs of Nashville. Here is the troubled inner life of Garth Brooks, the greatest-selling solo artist of all time. Vince Gill takes a song out of an old leather bag and records a No.1 hit. Reba McEntire angers her fans so much that they tear up her photos, Patty Loveless sings her heart out while her beloved older sister lies dying in a nearby hospital and superstar Shania Twain talks with handicapped Fan Fair goers. Here is Mary Chapin Carpenter singing at the White House instead of Fan Fair. Here are Alan Jackson and Brooks and Dunn at the height of their success juxtaposed against the struggles of Emmylou Harris. The younger stars are portrayed as well: LeAnn Rimes, Mindy McCready, James Bonamy, and BR5-49, all in vivid, novelesque detail. Unknowns, once-knowns, label reps, producers, songwriters and managers are all part of this rich mosaic of Nashville life as it plays out for one incredible week.

To millions of country fans, Three Chords and the Truth will be a book of revelations. Those who have rarely listened to country music will learn why it is the most-listened-to music in the nation, played on more than 2,400 radio stations. And everyone who reads it will never again hear a country song quite the same way.