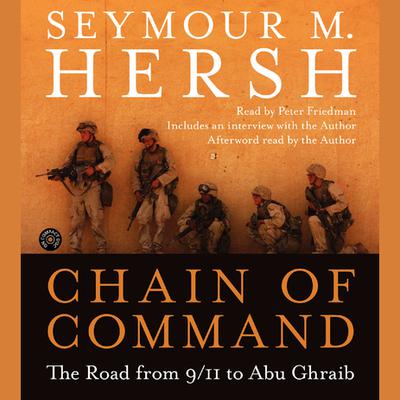 Since September 11, 2001, Seymour M. Hersh has riveted readers -- and outraged the Bush Administration -- with his stories in The New Yorker magazine, including his breakthrough pieces on the Abu Gharaib prison scandal. Now, in Chain of Command, he brings together this reporting, along with new revelations, to answer the critical question of the last three years: how did America get from the clear morning when hijacked airplanes crashed into the World Trade Center and the Pentagon to a divisive and dirty war in Iraq?

Hersh established himself at the forefront of investigative journalism thirty-five years ago when he broke the news of the massacre in My Lai, Vietnam, for which he won a Pulitzer Prize. Ever since, he's challenged America's power elite by publishing the stories that others can't or won't tell.

In Chain of Command, Hersh takes an unflinching look behind the public story of President Bush's "war on terror" and into the lies and obsessions that led America into Iraq. With an introduction by The New Yorker's editor, David Remnick, Chain of Command is a devastating portrait of an Administration blinded by ideology and of a President whose decisions have made the world a more dangerous place for America.