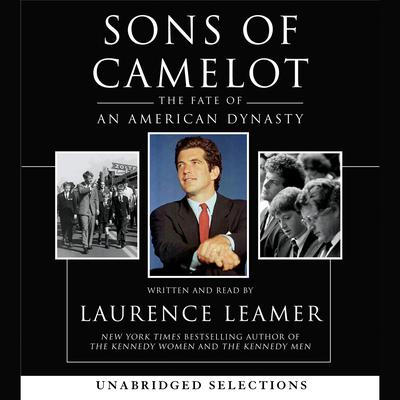 From renowned biographer and New York Times bestselling author of The Kennedy Women and The Kennedy Men comes THE SONS OF CAMELOT, the second volume in a multi-generational history bound to be considered an American epic.

Almost a year before publication, THE SONS OF CAMELOT: The Fate of an American Dynasty was already being widely discussed and debated in the media. Based on exclusive interviews with many Kennedy family members, their closest friends and associates, and five years of research, THE SONS OF CAMELOT is neither tabloid fodder nor a sanitized authorized biography but a stunningly revealing, deeply truthful account with intimate new information on every page.

In this outstanding continuation of The Kennedy Men, his powerful American epic of the Kennedy family, Laurence Leamer chronicles the lives of the Kennedy sons and grandsons after the assassination of President John F. Kennedy, and their struggle to fulfill the family legacy. These lives make for a book of overwhelming drama full of exalted aspirations, notable achievements and the most spectacular mishaps, excesses and tragedies. For the most part, these Kennedy men fell far short of the great vision that Joseph P. Kennedy had for his sons and grandsons. Their lives have been a bewildering juxtaposition of the most notable achievements and the most spectacular failures. There have been needless deaths, crippling accidents, drug addiction, alcoholism and allegations of rape. Their pratfalls, mishaps, excesses and tragedies have been one of the most certain forms of American popular entertainment for the last four decades. Yet among them are those who have helped Americans to have better health care, to sail on clean waters, to raise the rights and lives of those with mental retardation, to assist the poorest of African nations, to enable those with disabilities to lead normal lives, and to give health care givers opportunities.

In Leamer’s passionate narrative, each Kennedy man becomes not the passive victim of the happenstance of birth and upbringing, but a full participant in his own fate. The good that the Kennedy sons have done is amply chronicled, and so is the bad and the tragic. John F. Kennedy Jr.’s life is a thread running through the pages of THE SONS OF CAMELOT. Some may be drawn to the book largely to read the definitive portrait based largely on the full cooperation of his eight closest friends. Others may come intrigued to read the intimate story of Senator Edward Kennedy or the stirring tale of Timmy Kennedy Shriver’s rise to the head of Special Olympics International. But whatever draws the readers, they will read on driven by the powerful dramatic narrative with its impeccably researched details.

Some of these pages are inspiring, some are shocking, but all the pages are truthful. THE SONS OF CAMELOT is a spellbinding history of individuals and a family, a journey of character through time told by a brilliant, masterful writer.