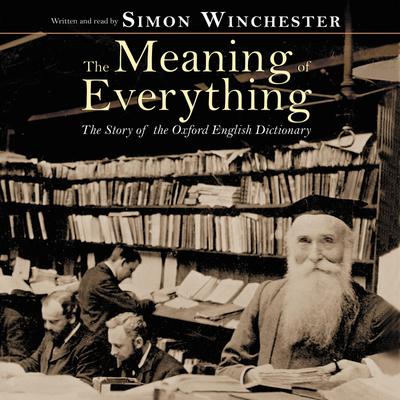 The Meaning of Everything

From the best-selling author of The Professor and the Madman, The Map That Changed the World, and Krakatoa comes a truly wonderful celebration of the English language and of its unrivaled treasure house, the Oxford English Dictionary.

Writing with marvelous brio, Winchester first serves up a lightning history of the English language--"so vast, so sprawling, so wonderfully unwieldy"--and pays homage to the great dictionary makers, from "the irredeemably famous" Samuel Johnson to the "short, pale, smug and boastful" schoolmaster from New Hartford, Noah Webster. He then turns his unmatched talent for story-telling to the making of this most venerable of dictionaries. In this fast-paced narrative, the reader will discover lively portraits of such key figures as the brilliant but tubercular first editor Herbert Coleridge (grandson of the poet), the colorful, boisterous Frederick Furnivall (who left the project in a shambles), and James Augustus Henry Murray, who spent a half-century bringing the project to fruition. Winchester lovingly describes the nuts-and-bolts of dictionary making--how unexpectedly tricky the dictionary entry for marzipan was, or how fraternity turned out so much longer and monkey so much more ancient than anticipated--and how bondmaid was left out completely, its slips found lurking under a pile of books long after the B-volume had gone to press. We visit the ugly corrugated iron structure that Murray grandly dubbed the Scriptorium--the Scrippy or the Shed, as locals called it--and meet some of the legion of volunteers, from Fitzedward Hall, a bitter hermit obsessively devoted to the OED, to W. C. Minor, whose story is one of dangerous madness, ineluctable sadness, and ultimate redemption.

The Meaning of Everything is a scintillating account of the creation of the greatest monument ever erected to a living language. Simon Winchester's supple, vigorous prose illuminates this dauntingly ambitious project--a seventy-year odyssey to create the grandfather of all word-books, the world's unrivalled uber-dictionary.