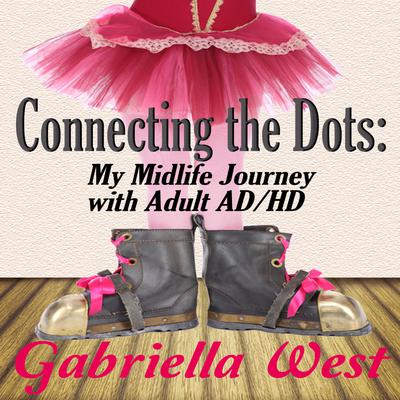 Connecting the Dots: My Midlife Journey with Adult ADHD

My Midlife Journey with Adult AD/HD

Most of us have heard of ADHD (Attention Deficit/Hyperactivity Disorder), so why is it so common for women not to be diagnosed until they are in midlife? While boys manifest their ADHD in hyperactive behaviors, female sufferers tend to internalize their symptoms, contending with anxiety, depression, demoralization, and self-esteem issues. Because of this, a woman's diagnosis often comes later on, with the realization that she is just not coping with life, work, and relationships as well as she should be. She's not meeting anyone's expectations, certainly not her own. So much has been discovered in the last ten years about ADHD in girls and women, but a lot of it's still not commonly known. Awareness of your symptoms is the key to change, and it all begins with self-awareness.

Novelist Gabriella West is refreshingly candid about her journey towards a diagnosis of ADHD, which started a few years ago when she encouraged her female partner to get a diagnosis. She uncovers a family history of the disorder, looking back at her own mother's life as a divorced American in Ireland in the 1970s. In Connecting the Dots she highlights common symptoms that women with inattentive-type ADHD experience, and shows that although getting a diagnosis is not necessarily easy, the relief of finding an explanation for things that previously just seemed "wrong" is enormous and healing. (Approx. 8500 words--including appendices that offer the scoop on the current range of ADHD meds, a checklist of symptoms for inattentive ADD, and an added section on ADD and creativity.)