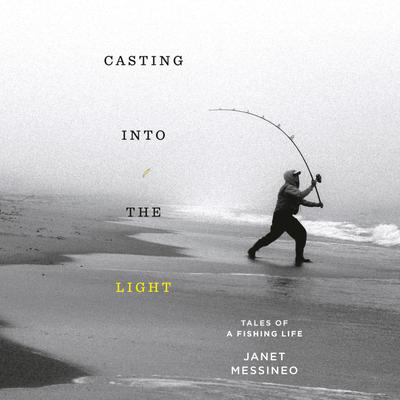 Casting into the Light

Tales of a Fishing Life

Tales of a champion surfcaster: the education of a young woman hell-bent on following her dream and learning the mysterious and profound sport, and art, of surfcasting, on the island of Martha’s Vineyard.

Janet Messineo knew from the get-go that she wanted to become a great fisherman. She knew she was as capable as any man of catching and landing a huge fish. It took years—and many terrifying nights along on the beach in complete darkness, in search of a huge creature to pull out of the sea—for her to prove to herself and to the male-dominated fishing community that she could make her dream real.

Messineo writes of the object of her obsession: striped bass and how it can take a lifetime to become a proficient striped bass fisherman; of stripers as nocturnal feeders, hard-fighting, clever fish that under the cover of darkness trap bait against jetties or between fields of large boulders near shorelines, or, once hooked, rub their mouths against the rocks to cut the line.

She writes of growing up in Lawrence, Massachusetts, and Salem, New Hampshire, the granddaughter of textile mill workers, tagging along with her father and brother as they cast off of jetties; of going to art school, feeling from a young age the need to escape, and finding herself, one summer, on the Vineyard.

She describes the series of jobs that supported her fishing—waitressing at the Black Dog, Helios, and the Home Port, among other restaurants. She writes of her education in patience and the technique to land a fish; learning the equipment—hooks, sinkers, her first squid jig; buying her first one-ounce Rebel lure.

She re-created the thrill of fishing at night, of being buffeted by the island’s harsh winds and torrential rains; the terror of hooking something mysterious in the darkness that might pull her into water over her head.

She gives us a rich portrait of island life and writes of its history and of Chappaquiddick’s (it belonged to the Wampanoags, who originally called it Cheppiaquidne—“separate island”); of the Martha’s Vineyard Derby: its beginning in 1946 as a way to bring tourism to the island during the offseason, and the Derby’s growing into one of the largest tournaments in the world.

Messineo describes her dream of becoming a marine taxidermist, of learning the craft and perfecting the art of it. She writes of the men she’s fished with and the women who forged the path for others (among them, Lorraine “Tootie” Johnson, who fished Vineyard waters for more than sixty years, and Lori VanDerlaske, who won the Derby shore division in 1995). And she writes of her life commingled with fishing—her marriage to a singer, poet, activist; their adopting a son with Asperger’s; and her teaching him to fish. She writes of the transformative power of fishing that helped her to shake off drugs and alcohol, and of her profound respect for fish as a magnificent animal.

With eighteen of the author’s favorite fish recipes, Casting into the Light is a book about following one’s dreams and about the quiet reckoning with self in the long hours of darkness at the water’s edge, with the sounds of the ocean, the night air, and the jet-black sky.