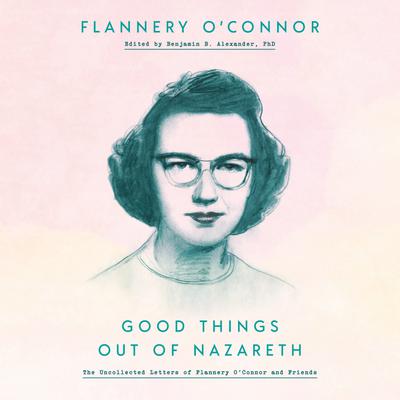 Good Things Out of Nazareth

The Uncollected Letters of Flannery O'Connor and Friends

A literary treasure of over one hundred unpublished letters from National Book Award-winning author Flannery O'Connor and her circle of extraordinary friends.

Flannery O’Connor is a master of twentieth-century American fiction, joining, since her untimely death in 1964, the likes of Hawthorne, Hemingway, and Faulkner. Those familiar with her work know that her powerful ethical vision was rooted in a quiet, devout faith and informed all she wrote and did.

Good Things Out of Nazareth, a much-anticipated collection of many of O’Connor’s previously unpublished letters—along with those of literary luminaries such as Walker Percy (The Moviegoer), Caroline Gordon (None Shall Look Back), Katherine Anne Porter (Ship of Fools), Robert Giroux and movie critic Stanley Kauffmann. The letters explore such themes as creativity, faith, suffering, and writing. Brought together, they form a riveting literary portrait of these friends, artists, and thinkers. Here we find their joys and loves, as well as their trials and tribulations as they struggle with doubt and illness while championing their beliefs and often confronting racism in American society during the civil rights era.

Praise for Good Things Out of Nazareth

“An epistolary group portrait that will appeal to readers interested in the Catholic underpinnings of O'Connor's life and work . . . These letters by the National Book Award–winning short story writer and her friends alternately fit and break the mold. Anyone looking for Southern literary gossip will find plenty of barbs. . . . But there’s also higher-toned talk on topics such as the symbolism in O’Connor’s work and the nature of free will.”—Kirkus Reviews

“A fascinating set of Flannery O’Connor’s correspondence . . . The compilation is highlighted by gems from O’Connor’s writing mentor, Caroline Gordon. . . . While O’Connor’s milieu can seem intimidatingly insular, the volume allows readers to feel closer to the writer, by glimpsing O’Connor’s struggles with lupus, which sometimes leaves her bedridden or walking on crutches, and by hearing her famously strong Georgian accent in the colloquialisms she sprinkles throughout the letters. . . . This is an important addition to the knowledge of O’Connor, her world, and her writing.”—Publishers Weekly