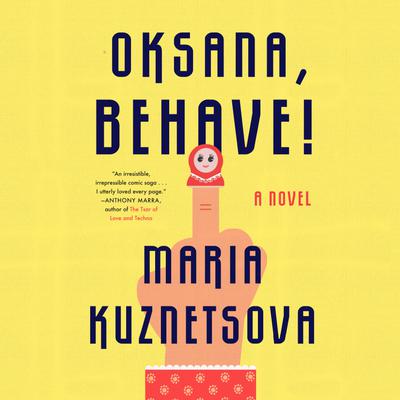 “[The] Ukrainian American heroine of this sweet-bitter debut is a wisecracking fatalist who can be counted on to say the inappropriate thing, a tendency that becomes more pronounced as doomed crushes and family crises pile up on the road to adulthood.”—O: The Oprah Magazine

When Oksana and her family move from the Ukraine to Florida to begin a new American life, her physicist father delivers pizza at night to make ends meet, her cranky mother sits at home all day worrying, and her flamboyant grandmother relishes the attention she gets from men. All Oksana wants is to be as far away from her family as possible, to have friends, and to be normal—and though she constantly tries to do the right thing, she keeps getting in trouble.

As she grows up, she continues to misbehave, from somewhat accidentally maiming the school-bus bully, to stealing the much-coveted key to New York City’s Gramercy Park, to falling in love with a married man. After her grandmother moves back to Ukraine, Oksana longs for the motherland that looms large in her imagination but is a country she never really knew.

When she visits her grandmother in Yalta and learns about her romantic past, Oksana comes to a new understanding of how to live without causing harm to the people she loves. But will Oksana ever quite learn to behave?

“What luck for readers that Oksana can’t behave! Little devil, infinite imbecile, poor futureless child—all the names her displaced, loving family give to her as she crashes and burns and wanders the wilderness of her inheritance, fit perfectly. As outrageous as she is, as funny and as awful as she can be, though, in Oksana, Maria Kuznetsova has also created a character of great passion and depth—of tragedy, even, too—the very sort that populate the stories of Chekhov and Tolstoy, the poems of Anna Akhmatova, and all the other Russian writers Oksana looks to for comfort and company and some sort of bearing in this absurd world. This novel is a stark, hilarious delight.”—Paul Harding, Pulitzer Prize–winning author of Tinkers