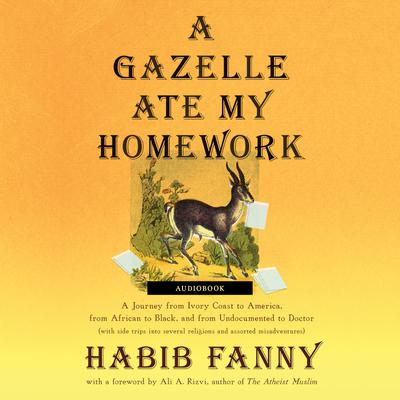 A Gazelle Ate My Homework

A Journey from Ivory Coast to America, from African to Black, and from Undocumented to Doctor (with side trips into several religions and assorted misadventures)

From a childhood in Ivory Coast to a career as an American physician, Habib Fanny journeys across continents, cultures and identities, telling a few tall tales and finding his own story along the way.Sick of living in the shadows of corrupt post-colonial Ivory Coast, intrepid gazelle hunter Habib Fanny schemes to see the opulence of America for himself, with naught but rudimentary raft-making skills and his trusty spear to aid him. Well...that's one version of the story. In truth, Habib crosses continents, endures poverty, and navigates the complicated systems of higher education. His journey to become an American is beset not by lions and man-eating sharks, but rather by persistent internal questions, which he attacks with the same rigor he brings to his medical schooling. What does it mean to be a Muslim, a Christian, an agnostic or, maybe, an atheist? What does it mean to be African in America? And how on earth do you deal with the dating scene? As he navigates the shifting waters of cultural identity, he's forced to confront his own prejudices—about religion, about other marginalized communities, and ultimately about himself. Along the way, he learns what to do when you fall into a well, why you can't carry a sword on campus, and how to treat a patient who thinks you're the cleaning staff. Habib Fanny—that's Doctor Habib Fanny, M.D., actually—doesn't find gold-paved streets in America, but with humor and curiosity, he finds a path all his own.