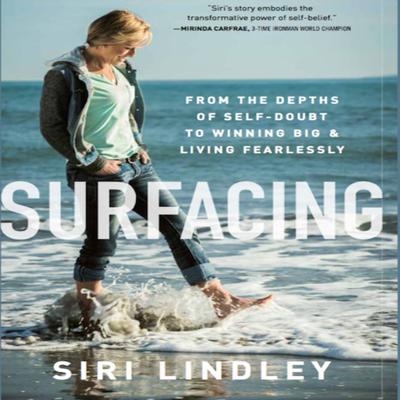 Surfacing: from the depths of self-doubt to winning big and living fearlessly

In Surfacing, Siri Lindley opens up about her unique celebrity-dappled early life. When and NFL superstar notices her beautiful mother, her idyllic childhood is upended. Glitzy dinner parties and world travel pull her mother away, and Lindley grows up feeling alone and out of place. As her intense loneliness grows into anger, she lashes out against her New England life of privilege.

Shy and painfully self-aware, Lindley finds solace in sports, playing field hockey, ice hockey and lacrosse at Brown University. But when she misses the cut for the US lacrosse team after college, she is left directionless-until a friend invites her to watch a triathlon. Lindley's dream is reignited and she never looks back.

Success doesn't come easily. Lindley fails early and often-brutal swim starts, bike equipment failures at key races, grueling workouts-but it's debilitating anxiety that still haunts her. She turns to unconventional Australia coach, Brett Sutton, who helps her tear up her script of self-doubt and transforms her into a world champion.

Lindley retires from the sport at the peak of her success, intent on helping athletes realize their own dreams, and finally finds the courage to step out into her true self and find love as a gay woman.

Surfacing is the breathtakingly honest book that shares Lindley's daring journey. She is proof that it's never too late to rewrite your own story and change the thoughts, habits and behaviors that hold you back. Surfacing will inspire you as it shows you how to stop being your own worst enemy and start uncovering your potential.