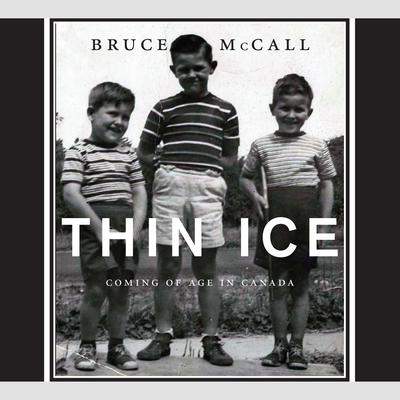 In this subversively funny memoir, the acclaimed New Yorker humorist and Canadian expat Bruce McCall tells what it was like to grow up in Simcoe, Toronto, and Windsor, Ontario, crammed into shabby and close quarters with a family that was dysfunctional before the word had even been invented. Bruce McCall’s father was an inaccessible tyrant. His mother drank to blunt the effect of her husband’s rages and to dodge the duties of taking care of six children.

Thin Ice recounts the author’s setbacks, sometimes as high comedy, sometimes as pure agony, and shows how he transcended them. While failing at hockey, political rebellion, and high school, McCall turned to reading and art as psychological salvation. Ultimately, he read, wrote, and drew himself out of pennilessness and despair and came to terms with his family’s problems. This honest and remarkable memoir recounts a story of adversity overcome.