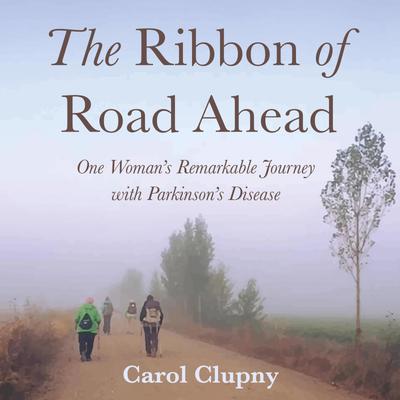 The Ribbon of Road Ahead

At forty-nine years old, Carol Clupny was an active, driven woman with a career, a family, and a zest for adventure. A mere year later, she struggles with strange symptoms of internal tremors, frozen shoulders, and a serious intestinal infection. She doesn’t understand why she can’t paddle a kayak or throw the ball for her dogs. Then comes the diagnosis: early onset Parkinson’s Disease. “How can I keep going?” she asks her doctor. “Keep exercising and taking your meds. You have five to ten years before things get more difficult.” Carol finds she can no longer work. From her easy chair, she watches videos of people in advanced stages of Parkinson’s. “I can’t go there,” she tells herself. Struggling out of her chair, she shuffles outside to the mailbox and back. These first steps begin her training for the trip at the top of her bucket list: a pilgrimage on the Camino de Santiago in Spain. Completing this adventure once is not enough, she returns again and again. She reads in an article that bicycling helps mitigate the symptoms of Parkinson’s disease. Dusting off a seldom-used bike in her garage, she leans it against the mailbox to mount up. Away she goes with newfound freedom to train for the RAGBRAI (the Des Moines Registers Annual Bike Ride Across Iowa). On her trips, Carol faces challenges she never could have foreseen. She forges lasting friendships and confronts the reality of living with a progressive neurological disorder. Crashing her bike, slipping along muddy paths with a heavy backpack, suffering through blisters and tendonitis, using a field as a bathroom, she approaches every aspect of life with an attitude of adventure. Carol is not afraid to face the apathy and depression that come with Parkinson’s. Instead of being drug down into darkness, she finds strategies for lifting herself, and others around her, up into the light.