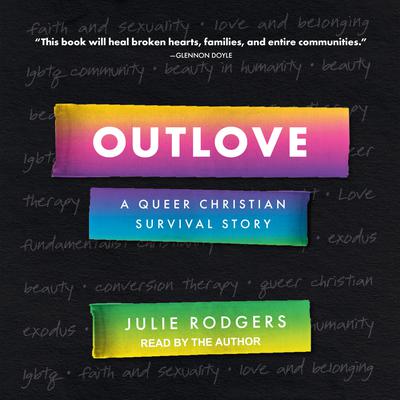 After decades of bouncing between hope and despair, Evangelical, Baptist-raised Julie Rodgers found herself making a powerful public statement that her former self would have never said: "I support same-sex marriage in the church."

When Rodgers came out to her family as a junior in high school, she still believed that God would sanctify her and eventually make her straight. Wanting so intensely to be good, she spent her adolescent and early adult years with an ex-gay ministry, praying for liberation from her homosexuality. In Outlove Rodgers details her deeply personal journey from a life of self-denial in the name of faith to her role in leading the take-down of Exodus International, the largest ex-gay organization in the world, to her marriage to a woman at the Washington National Cathedral. We see the larger story of why many have left conservative religious structures in order to claim their truest identity.

Outlove is about love and losses, political and religious power-plays, and the cost to those who sought to stay in a faith community that wouldn't accept them. Shedding light on the debate between Evangelical Christians and the LGBTQ community—a battle that continues to rage on in the national news and in courtrooms across the country—this book ultimately casts a hopeful vision for how the church can heal.