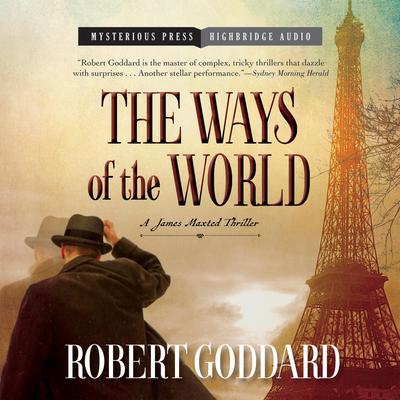 The Ways of the World

From the Edgar award-winning, internationally bestselling British writer Robert Goddard comes a captivating new trilogy of historical thrillers, set at the tail end of World War I and featuring the devilishly charismatic James Max Maxted, a Royal Flying Corps veteran who has a hard time keeping himself out of trouble. Four years of horrific fighting have finally ended on the battlefield, but in the spring of 1919, Paris is filled with delegates from around the world who are still trying to hammer out the terms of peace. One such delegate is British diplomat Sir Henry Maxted, in charge of liaising with the Brazilians regarding seized ships. But before a deal is reached Sir Henry Maxted turns up dead outside a Montparnasse apartment building, apparently having fallen from the roof. His sons Max and Ashley are sent to Paris to collect the body, and it quickly becomes clear that the theory the French police have put forward is flawed. But since the murder of a diplomat could be disastrous for the peace conference, no one is keen to ask questions—except Max.

What begins as an innocent inquiry into his father's death soon leads Max into a dangerous world of secret allegiances, international espionage, and people double-crossing each other at the highest levels of government. How far is he willing to go discover the truth about the death of a father he barely knew? And how much will the authorities—and others—let him find out before threatening Max's own life?