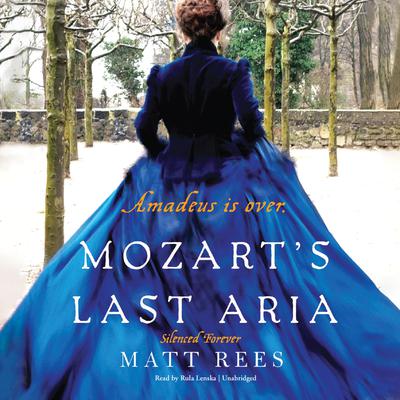 Transporting listeners to the salonsand concert halls of eighteenth-century Austria, Mozart’s Last Aria pulls back the curtain on a world of powerfulsecrets and powerful men—from the enigmatic Freemasons to the secret police tothe Austrian Emperor himself—in a detailed story of soaring music, burningpassion, and mortal danger.

In December 1791, Madame Maria AnnaBerchtold von Sonnenburg, known to her family as Nannerl, receives a letterfrom her sister-in-law Costanze with devastating news: Nannerl’s brother, WolfgangAmadeus Mozart, is dead. But Constanze’s letter carries more than just news ofthe great composer’s death. Months earlier, Mozart had confided to his wifethat he believed his life was in danger, and on his deathbed announced that hehad been poisoned, though he was never able to name his murderer.

Now, as Nannerl sets off for Viennato pay her final respects, she finds herself entering a web of suspicion andintrigue involving rival composers, jealous lovers, and sinister creditors, inwhich even Mozart’s masonic brothers—including Prince Lichnowsky—harbor darksecrets about their one-time friend. And as Nannerl digs deeper into themystery surrounding Mozart’s demise, the tempo quickens, and her brother’s blackfate threatens to engulf Nannerl as well.

Notice to our customers about Mozart’s Last Aria