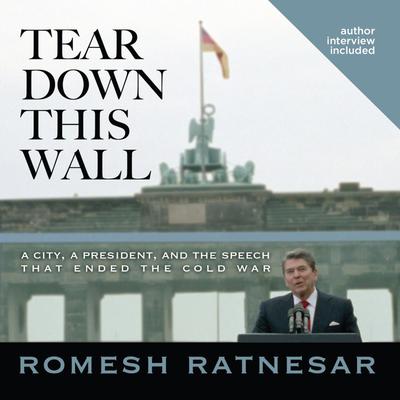 Tear Down This Wall

A City, a President, and the Speech that Ended the Cold War

On June 12, 1987, Ronald Reagan addressed a crowd of 20,000 people in West Berlin in the shadow of the Berlin Wall. The words he delivered that afternoon would become among the most famous in presidential history. “Mr. Gorbachev, open this gate,” Reagan said. “Mr. Gorbachev, tear down this Wall!” In this riveting and fast-paced audio book, Romesh Ratnesar provides an account of how Reagan arrived at his defining moment and what followed from it. The audio is based on interviews with numerous former Reagan administration officials and American and German eyewitnesses to the speech, as well as recently declassified State Department documents and East German records of the president’s trip. Ratnesar provides new details about the origins of Reagan’s speech and the debate within the administration about how to issue the fateful challenge to Gorbachev. Tear Down This Wall re-creates the charged atmosphere surrounding Reagan’s visit to Berlin and explores the speech’s role in bringing about the fall of the Berlin Wall less than two years later. At the heart of the story is the relationship between two giants of the late twentieth century: Ronald Reagan and Mikhail Gorbachev. Departing from the view that Reagan “won” the Cold War, Ratnesar demonstrates that both Reagan and Gorbachev played indispensable roles in bringing about the end of the U.S.-Soviet rivalry. It was the trust that Reagan and Gorbachev built in each other that allowed them finally to overcome the suspicions that had held their predecessors back. Calling on Gorbachev to tear down the Wall, in Reagan’s mind, might actually encourage him to do it. Reagan’s speech in Berlin was more than a good sound bite. Twenty years after the fall of the Berlin Wall, we can now see the speech as the event that marked the beginning of the end of the Cold War.