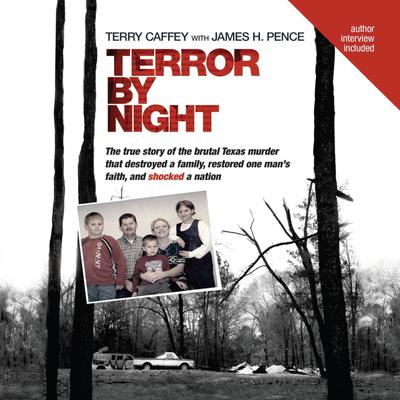 In one evening, Terry Caffey lost everything.  His wife, Penny, and his sons, Matthew and Tyler, were brutally murdered; his home was burned to the ground, and his sixteen-year-old daughter, Erin, was in jail, charged with thiree counts of capital murder.  In one year's time, God would restore it all. At 3:00 a.m. on March 1, 2008, Terry Caffey awoke to find his daughter’s former boyfriend standing in the bedroom doorway with a gun. An instant later the teen opened fire, killing Terry’s wife and wounding Terry six times. As he slipped toward unconsciousness, Terry heard his son crying upstairs. More gunfire followed. When he regained consciousness, he felt the searing heat of his burning house. Terry knew it was too late to save his family, but even in the midst of the flames, he assigned himself a new mission. He fought to stay awake and escaped the burning house through a bathroom window. As Terry stumbled and crawled four hundred yards through pitch darkness, he asked God to keep him alive long enough to identify the killer, and then to let him die. God allowed Terry to identify the murderer, but He didn’t let Terry die. What happened next is nothing short of miraculous.